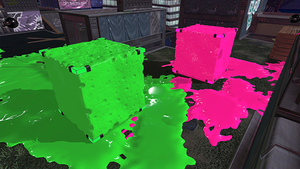 Goosponge is a multiplayer stage in Splatoon 2. It was the third variation of Shifty Station, and first appeared in the Fries vs. McNuggets, Front Roll vs. Back Roll, and Sci-Fi vs. Fantasy Splatfests. It returned in the Mikey vs. Donnie, Hello Kitty vs. Cinnamoroll, and Chaos vs. Order Splatfests. As of version 5.0.0, it is exclusively available in Private Battles. It features Inkrails and sponges that allow for navigation to key areas.

Players spawn on either end of the stage, on raised platforms that lead down to a central area. To the right, there is a raised platform that is accessible via a sponge. To the left, there is an Inkrail on an isolated platform that the player can jump to in squid or octopus form. Towards the center of the stage are two more Inkrails, which can be used to get on their corresponding platforms. Sponges, walls, and crates in the center area can be used for cover.

When this layout was reused in May 2018, more sponges were added to allow greater movement to key areas. For example, a sponge was added alongside the left side ink rail platform to allow a route to the Inkrail that does not involve jumping. Some sponges had their sizes changed, as the centre sponges allowed to get on both towers, and the sponge near the right Inkrail was made into a cube. Also, the crates centrally placed in the platform just below spawn were rotated 90 degrees clockwise.

The original version of the map is no longer available for play.

Goosponge is named after the Goosebumps books by R. L. Stine, as well as referencing the sponges central to the stage's design.