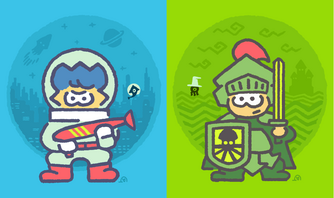 Sci-Fi vs. Fantasy was a Splatfest event in Splatoon 2. It was exclusive to North America and Oceania. It was announced on 13 November 2017. The results were given on 19 November 2017.

The full name of each choice was "SCIENCE FICTION" and "FANTASY". The team name portion of Splatfest titles was "Sci-Fi" and "Fantasy".

Detailed results were released through SplatNet.