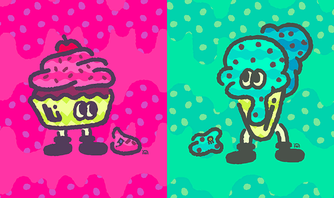 Cake vs. Ice Cream was a Splatfest event in Splatoon 2. It was held in North America, Oceania, and Europe. It was announced on 6 July 2017. The event lasted four hours. The results were given on 16 July 2017.

It was accessible by downloading the Splatoon 2 Splatfest World Premiere from the Nintendo eShop.

The Splatfest World Premiere was a free demo that only allowed players to play the Splatoon 2 tutorial, see the news announcement of the Cake vs. Ice Cream Splatfest, and choose a side. All of this could be done in advance of the Splatfest event. Unlike the full version of Splatoon 2, the Splatfest World Premiere had only two stages per two hours. For the first two hours, Starfish Mainstage and Inkblot Art Academy were playable. For the last two hours, Moray Towers and Humpback Pump Track were playable.

Results if Cake were to win[2]

Results if Cake were to win