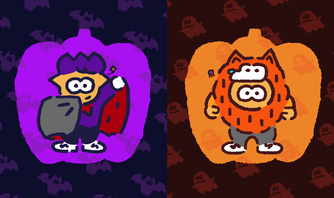 Vampire vs. Werewolf was a Splatfest event in Splatoon 2. It was exclusive to North America and Oceania. It was announced on 6 October 2017. The results were given on 15 October 2017.

The Splatfest theme was two monsters from popular culture, the vampire and the werewolf.

The full name of each choice was "VAMPIRES" and "WEREWOLVES". The team name portion of Splatfest titles was "Vampire" and "Werewolf".

Vampire vs. Werewolf featured the 4th Shifty Station layout, Windmill House on the Pearlie, albeit the original iteration, which featured a glass wall separating the two halves of the map, requiring teams to use the side revolving doors to traverse to opposing territory.

Detailed results were released through SplatNet.