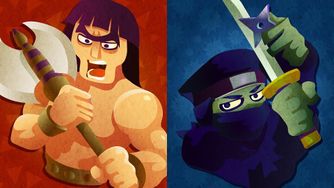 Barbarian vs. Ninja was a Splatfest event in Splatoon. It was held in Europe and Oceania. It was announced on 23 January 2016. The results were given on 31 January 2016.

The full name of each choice was "I play like a BARBARIAN" and "I play like a NINJA". The team name portion of Splatfest titles was "Barbarian" and "Ninja".

The three stages selected for this Splatfest were: Walleye Warehouse, Piranha Pit and Ancho-V Games.