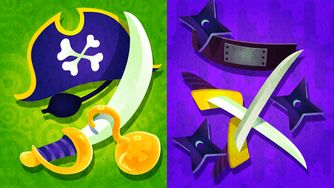 Pirates vs. Ninjas was a Splatfest event in Splatoon. It was held for North America only. It was announced on 23 October 2015. The results were given on 1 November 2015.

The full name of each choice was "PIRATES" and "NINJAS". The team name portion of Splatfest titles was "Pirate" and "Ninja".

The three stages selected for this Splatfest were Walleye Warehouse, Camp Triggerfish, and Moray Towers.

Results if Ninjas were to win