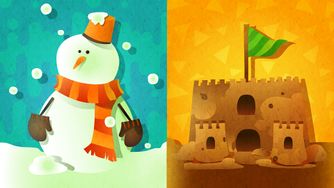 Snowman vs. Sandcastle was a Splatfest event in Splatoon. It was held for North America only. It was announced on 14 March 2016. The results were given on 20 March 2016.

The three stages selected for this Splatfest were Arowana Mall, Museum d'Alfonsino, and Mahi-Mahi Resort.

Results if Snowman were to win