MakoMart is a multiplayer stage in Splatoon 2 and Splatoon 3. It is modeled after a supermarket or grocery store.

MakoMart is a fairly open stage in terms of tractability, with very few areas that a function as inescapable choke points. Leading from each team's spawn point, players can either jump straight down into the accessible battlefield, head left to immediately face a Inkrail which takes them closer to the center of the stage, or head right up a ramp to the far-right side. After dropping down, a large wall provides coverage and a vantage point for the team which cannot be accessed from the other side. Players can either head to the open path to the left which enemies can enter through, or up the barricade or ramps to gain a vantage point. The center portion of the stage features a raised area with two large obstacles on each side with a box in the center. Two narrow hallways line the outer side of this area, with inkable walls to get directly back to the center. To each team's right is a bit of open space with a ramp. Due to having a direct open path to the center, MakoMart facilitates a quick pace.

The Splat Zone is located at the center of the stage and consists of all the area between the two main blocks. The spawn point for each team has been moved to the wider platform to the right of the original spawn point. Notable changes to the stage layout include an expansion to the raised area to each team's immediate left as well as sponges added at ground level. Minor blocks have been added and removed, and the center block in the Splat Zones is removed, replaced with a wide bumper.

The Tower is located at the center of the stage in place of the original box. The spawn point is roughly in the same place as in Splat Zones, though pushed back a bit more. The Tower travels towards the enemy's side before going down the ramp to its left, then raising shortly before traveling right to the entrance to the enemy base. It then travels a bit further and reaches the goal, which is just past the opening.

The Rainmaker is located at the center of the stage on top of the block. The position of the spawn point is radically different, being on the immediate left of the Turf Wars spawn point, just before the Inkrail, with the area raised even more than normal. The goals are located at the same location of the spawn point in Turf Wars with a large slope to make the area accessible. The main two options to get to the goal is either through the normally accessible open path to each team's left or on the other side. An inkable block has been added to allow players to enter into the opposing team's base through the upper route.

The baskets are located just on the opposing sides of the center raised area on the uninkable surface with a bump added. The spawn point is in the same location as it is in Tower Control. An inkable block is added to the left to allow players to jump to the same layer as the basket. An inkable ramp is also added to the right to make getting to the basket easier. 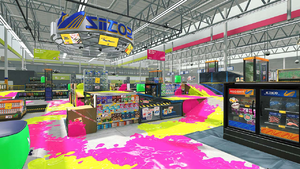 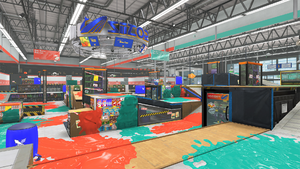 MakoMart returns in Splatoon 3 with a slightly new design. It is one of the stages that can have Tricolor Turf Wars.