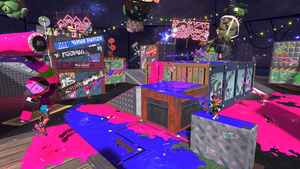 The Secret of S.P.L.A.T. is a multiplayer stage in Splatoon 2. It was the second variation of Shifty Station, and first appeared in the Flight vs. Invisibility and Lemon vs. No Lemon Splatfests. It returned in the Raph vs. Leo and Chaos vs. Order Splatfests. As of version 5.0.0, it is exclusively available in Private Battles. It features small, raised platforms in the central area that periodically move up and down.

Players spawn on either end of the stage, on raised platforms that lead down to a central area. There are two small raised platforms on either side of the central area that periodically move up and down, and a large platform topped with a small inkable block in the middle that moves opposite the side platforms. Various walls are placed about the level to use as cover.

When this layout was reused in May 2018, the small inkable block on the middle platform was removed, some walls were repositioned at the canyon of the spawn point, and the tall wall near the spawn points became inkable on one side and significantly shorter, while the rest of the layout was identical to the original incarnation.

The Secret of S.P.L.A.T. contains a third variation that hasn't been used in-game. The first variation is no longer available for play.

The Secret of S.P.L.A.T. is named after The Secret of NIMH, an animated adaptation of Robert C. O'Brien's book Mrs. Frisby and the Rats of NIMH.