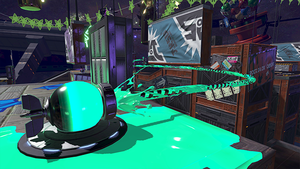 Railway Chillin' is a multiplayer stage in Splatoon 2. It was the fifteenth variation of Shifty Station that first appeared in the Trick vs. Treat Splatfest and returned in the Chaos vs. Order and Trick vs. Treat (2020) Splatfests. As of version 5.0.0, it is exclusively available in Private Battles. It features ride rails, which are the only way to get to the stage's center.

The spawn point is located on a large platform, with uninked turf on the left side. In front of this are various platforms with slightly lower points in elevation, occasionally connected by ramps. A few platforms at higher elevations are connected by ramps as well, usually having ride rails at the end. The ride rails connect either to other ride rails on the stage, or to the elevated platform in the center, the only point at which the two sides of the stage connect. This platform can only be reached by the ride rails, or by Super Jumping to a player that is already there. Between the platforms near spawn and the elevated platform in the middle, there is a large, low open area, with little more than a few crates and sponges for cover and navigation. The right side of this area is slightly lower than the left, and is connected by a ramp. On the far left and far right sides of this area are two ride rails on elevated platforms connected to the turf below by ramps.

Railway Chillin' is named after the book The Railway Children by Edith Nesbit. Its name references the ride rails seen around the stage.