From Inkipedia, the Splatoon wiki
Jump to navigation Jump to search
Splatoon 2​
The Bouncey Twins 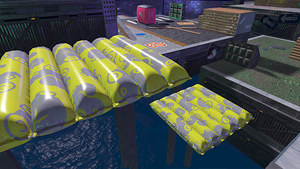 The Bouncey Twins is a multiplayer stage in Splatoon 2. It was the fourteenth variation of Shifty Station and first appeared in the Retro vs. Modern and Tsubuan vs. Koshian Splatfests. It returned in the Chaos vs. Order and Super Mushroom vs. Super Star Splatfests. As of version 5.0.0, it is exclusively available in Private Battles. It features Bounce Pads which can allow players to gain a height advantage, though many of them are placed over an abyss.

Players spawn on either end of the stage, on raised platforms that lead down to sequentially lower platforms with boxes and a bumper. These areas can be accessed by falling through grates, jumping on bounce pads or falling from one raised platform to a lower one. In the center is a raised platform with boxes in the middle that can only be accessed by jumping on the bounce pads from each side, and grated bridges from the sides of the center. The bounce pads are placed above pit hazards, providing access to higher areas at the risk of falling off the stage.

The Bouncey Twins is named after the Bobbsey Twins books written by many people under the pseudonym of Laura Lee Hope. The name refers to the Bounce Pads on the stage.