Port Mackerel is a multiplayer stage in Splatoon and Splatoon 2.

Port Mackerel is a shipping yard and, as such, numerous containers litter the field, making for several narrow paths in a grid shape. In the middle is another gridded area, and on either side of it is an open area and inkable forklifts that ride back and forth across all three lanes. There also exist two upper paths from either spawn point that run around the perimeter of the map, ending in the middle area. It includes many corridors, such as ones around large, colored boxes and crates.

Port Mackerel has open battlefields which are where most of the combat takes place. Both open battlefields are separated from each other by a set of cargo containers. These battlefields, while being very open for vision, can be difficult to maneuver around for some players, as the narrow paths and stacks of crates do not allow for much vision of the area. It is possible, in Turf War and Tower Control, to climb on top of the covered storage crates by either using the forklifts or by climbing on the Tower. These can serve as useful vantage points as they are on higher ground, and since they are covered in an ink-resistant tarp, there is no enemy ink to get stuck in. The walls of the crates are also inkable, giving players a place to recharge ink or hide, without having to give up their vantage point. There are four side passages in this stage, two on the player's side and two on the enemy side. They are all accessed on the left or right sides of the map and lead to small openings on the side of the open battlefields, which cannot be climbed up due to small ledges. The side passages are often forgotten parts of the map, particularly because they are mostly out of the action and are only accessible from the area near the spawn points.

Port Mackerel received a fair number of changes to its layout in Splatoon 2. The general structure of the stage is unchanged, but all the obstacles have been changed or spread out to make the corridors less tight. The forklifts now only travel halfway across the stage to the respective team's left. Four sponges have been added, one on each team's plaza and two at the very center of the stage.

In Splat Zones, there are two zones located on one side of the two open areas of the map. The only known change from the Turf War iteration is the fact that the forklifts that move back and forth between the shipping containers are absent.

In Splatoon 2, unlike in Splatoon, there is only a single Splat Zone at the center of the map. The only notable changes are the removal of the forklifts and the introduction of a small inkable barrier to the left corridor on each team's plaza.

The Tower starts in the center of the map and moves along the rail, passing through the open battlefields and weaving in between boxes until it reaches the top of the box directly in front of the opponent's spawn. Two inkable boxes have been added to the right side of the open battlefields, allowing players to access the side passages from this area.

In Splatoon 2, additional sponges have been added immediately in front of each team's spawn point to give them easier access to the upper area. The goal has been moved off the box and onto the ground beside it.

The Rainmaker is located in the middle of the stage. The Rainmaker must be taken to a pillar located on top of the cargo container in front of the rival spawn point. A couple of platforms are supplied to make reaching higher ground easier, while the pillar can only be accessed by either climbing the newly-placed board on the backside of the container or jumping from the high ground.

In Splatoon 2, the location of the Rainmaker and goal remain the same. A ramp has been added to make getting to the Rainmaker pedestal easier. Four additional sponges have been added, two immediately in front of each team's spawn as well as another sponge in each team's plaza of the opposing team's color. 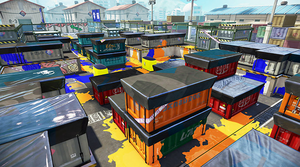 Port Mackerel was the first stage to be added to Splatoon after launch, being released on 2 June 2015 at 02:00 UTC.

Port Mackerel was available in the following Splatfests in Splatoon: 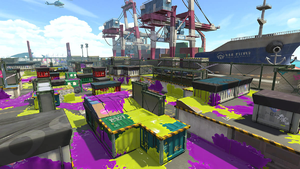 Port Mackerel was released with the launch of Splatoon 2. The turf on this stage has been widened, and many of the crates around the stage have either been shrunken down, had the tarps removed allowing them to be inked, or have been replaced with sponges. The forklifts from the first game return, but now only move across half of the stage's width. A modified version of this stage is used in A02 Far-Out Station in the Octo Expansion.