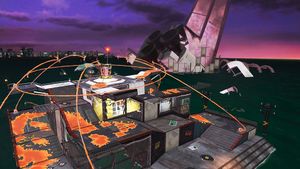 The Ruins of Ark Polaris is a Salmon Run exclusive online multiplayer stage in Splatoon 2. It was made available at The Shoal with the release of Version 4.2.0 on 7 November 2018.

The background features the tail of the titular spaceship, which was later revealed in the Alterna Logs in Return of the Mammalians to have been a colony ship originally intended to find a new world for humanity to inhabit. An accident near the edge of the solar system forced it to return to Earth, and without enough fuel to make a safe landing it remained in orbit for ten thousand years before crashing, killing all of its crew and cryopreserved life forms except for the experimental subject Bear No. 3. The Ark Polaris has worn-out text reading "PRIVATE PROPERTY" in English, as well as featuring giant letters spelling "ICA". There's a city in the background with many buildings that are still active. In night waves, the lights in the buildings turn off.

Some walls on the stage feature signs reading "Active Bear Area" in English. Bear tracks can be seen on the ground at low tide.

Ruins of Ark Polaris features an elevated platform in the center with three ramps leading to the ground. The central platform has two ride rails that both encircle half of the top platform. Two of the ramps provide an additional level in-between the lower level and the top platform. The third ramp leads down to a sandbar behind the structure. During low tide, the water recedes to reveal a shoreline with a central area and outer sandbar ring separated by a crescent of water.

Also, the Grizzco boat is within one DU of the sandbar and coming up close with it allows the player to hear the beginning music clip.