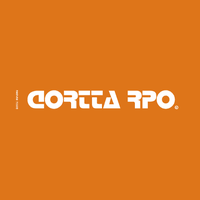 The Inkopolis Café is a chain of coffee shops within Inkopolis and Splatsville. They cannot be entered without the use of the out-of-bounds glitch.

Two Inkoplis Café logos exist; two squids holding onto a banner below them, with a shield between them, and a shell above the shield. Inside the shield, there's an Inkling letter resembling a "C." The other logo features one almost egg-ish shape and a blob-ish shape overlaying, with Inkopolis Café's name inside. The name of the company roughly spells out "CORTTA RPO".

One of the cafés is located underneath the Inkopolis News Studio in Inkopolis Plaza. It is on the left of the entrance to Spyke's alley. The café has a large, curved glass window that matches the shape of the studio above it. There is a counter where customers can buy food and drinks, with a menu on it. There are no lights in the café, and there is no one inside it. Occasionally a jellyfish (and sometimes two Inklings) can be seen dancing outside the window.

A second Café is in Inkopolis Plaza. It greatly resembles Inkopolis Café, but with a bench near it, the arcade machine in front of it, and a large sign on the side of the building. As stated in the conjectural name, it does not appear in the Square. It is right next to Booyah Base. The bottom floor has no window, and there are a couple of posters advertising Cooler Heads on the building's side. Occasionally, a few Inklings walk in front of it to abruptly stop and pose. The Plaza Café, like the café in Inkopolis Square, could just be an expansion of Inkopolis Café.

Arowana Mall houses two cafés, one on each team's side of the stage. Established on the ground level, only one side's full glass windows with Inkopolis Cafés name on it. It features a bar with blackboards above it, one larger table, one smaller table, seating, and a smaller blackboard. The walls are purple featuring yellow triangles. 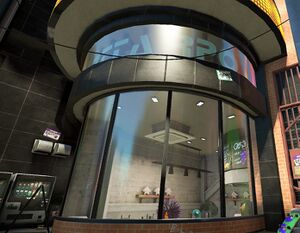 A café resembling a circular building with large curved glass windows is found in Inkopolis Square between the Deca Tower and the entrance to the Deepsea Metro. The café features a bar, two tables having four seats each, and one table attached to the wall with three seats in front of the windows. Attached to the wall are two planks featuring wooden carvings that resemble the "Jr. Mark". Spyke can be found sitting with a laptop in front of the windows. Also found inside is a jellyfish attending the bar and a jellyfish sleeping on the table in the back of the café.

It is unknown if the café is open or closed, as no one is found outside it. The lights are dimmed, and during Splatfests, the lights are turned off entirely.

Like in Splatoon, Arowana Mall houses two cafés, one on each team's side of the stage. The café's interior has changed since the first game, but still features tables and seats, blackboards showing the menu, along with drawings of coffee beans, forks, slices of cake, and cups.

A café is located within MakoMart which is tucked away in the corner of the stage.

In The Reef two separate cafés are established on both sides of the stage. 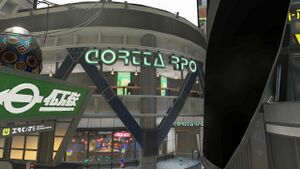 View of the café

In the square in Splatsville a café can be found above the studio Anarchy Splatcast is broadcasted and its entrance is between the studio and the Battle Lobby.

Like in Splatoon 2, a café is located within MakoMart which is tucked away in the corner of the stage.