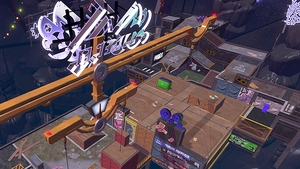 A Swiftly Tilting Balance is a multiplayer stage in Splatoon 2. It was the eleventh variation of Shifty Station, and first appeared in the Raph vs. Donnie and Hello Kitty vs. My Melody Splatfests. It returned in the Chaos vs. Order Splatfest. As of version 5.0.0, it is exclusively available in Private Battles. The stage is built like a large double-beam balance scale, and the weight of players and sub weapons will cause the large platforms on the stage to shift positions.

The main mechanic of this stage is a large double balance beam scale with a large pad near each spawn point and a pair of smaller pads near the center. The pads are balanced against their same-sized counterparts and are not connected between them. The scales tip based on the number of players and sub weapons on them, with the heavier side lowering and the lighter side raising accordingly. While moving up or down, a pattern on the top of the pad will glow light blue and a grinding metal sound effect will be heard. Between each spawn point and the larger pads is a lower area with many horizontal and vertical grates and a sponge that can be used to climb back on the left flank. The smaller pads in the middle are each flanked by a pit hazard on the left side and a short ramp providing cover on the right.

A Swiftly Tilting Balance is named after A Swiftly Tilting Planet, a novel by Madeleine L'Engle, which is itself a reference to the poem "Morning Song of Senlin" by Conrad Aiken. Additionally, it references the shape of the stage resembling a double-beam balance scale.