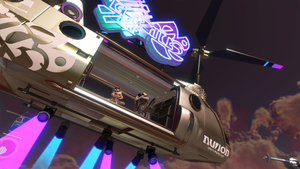 MC.Princess Diaries is a multiplayer stage in Splatoon 2. It was the twenty-fourth and final variation of Shifty Station and appeared in the Chaos vs. Order Splatfest. As of version 5.0.0, it is exclusively playable in Private Battles. Periodically, hyperbombs will drop from the sky which allow teams to ink large areas of turf. When one minute is left on the timer, Pearl will descend to let one player use the Princess Cannon.

MC.Princess Diaries is a large and open stage, including many curved walls, similar to Blackbelly Skatepark. Notably, the stage features the Princess Cannon and hyperbombs as unique features, and Off the Hook are seen performing live during the match.

While playing, groups of hyperbombs appear in three waves, at 2:45, 1:30, and 0:45 remaining. Players can only detonate the other team's bombs. At 1:20, Off the Hook's helicopter flies to the center of the stage; with one minute remaining, a pink cylinder appears and Pearl descends, accompanied by the text "It's the voice to end all voices!" As she nears the ground, her head begins to glow, indicating her Special weapon, the Princess Cannon, is ready to be used. Regardless of team or weapon, the first player to meet her gets to use the Princess Cannon, a weapon similar to the Killer Wail from Splatoon. After aiming it with motion or

and activating it with

, the player moves to the side and Pearl takes over, using her battle cry to fire it. If the player is splatted before the cannon is able to fire, the next player to meet Pearl will get to use the Princess Cannon. If the player is wearing Ink Armor and gets hit in the blast, they will immediately be splatted.

The stage takes place near the fallen NILS Statue, now surrounded with jellyfish that are studying it. Sponges and bunkers can also be found across the stage.

MC.Princess Diaries is named after The Princess Diaries, a series of young adult novels by Meg Cabot, as well as referencing Pearl's screen name in Marina's chat room.