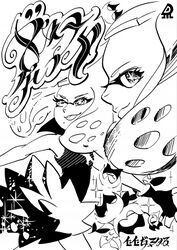 The front cover of Dear Pearl

Dear Pearl is a short manga written and drawn by Marina that bears many traits from shōjo manga. It was first announced on CoroCoro's website before being released in full as a bonus feature in Splatoon, Vol. 10.

The manga starts with Marina reminiscing about how she imagined the world on the surface, before she defected from Octarian society; she thought it to be filled with song. It then cuts to the construction of MC.Princess Diaries, showing a digger piloted by Marina that throws the three steel beams carried in its claw at the NILS Statue, knocking it over. Marina gets frustrated by this and tries to pull herself together, yet fails again on her second attempt. Pearl, drawn like a bishōjo, appears with a can of Tentacola and praises Marina, scaring her. Pearl chuckles in response and, now wearing her clothes from Chaos vs. Order, reminds Marina that the final Splatfest is drawing near. She then starts elegantly jumping from side to side after declaring that they should "go off with a bang", causing Marina to be awestruck by her coolness. The last page shows an apparently large Pearl using the Princess Cannon, with Marina watching admiringly. The manga ends with Marina wishing she could "shout out a Killer Wail too", over a panel showing a love letter to Pearl and an envelope sealed with a stamp showing the Splatfest symbol.

In the Japanese version, rather than by Pearl's coolness, Marina is instead awestruck by her stylishness. In the panel where Pearl is using the Princess Canon, Marina says in her inner monologue that Pearl has a huge presence despite her small stature, rather than that "[she is] so small...but [she is] so big." The stamp on the envelope is also changed, being the actual Splatfest symbol instead of an octopus symbol based on the octopus portion of it.

The word "Dear" followed by the intended reader's name is a common way to start a letter, as the manga may be intended as a love letter to Pearl.