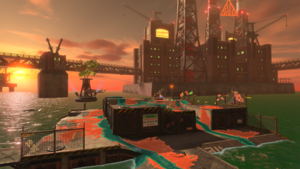 Reaching certain ranks during a Gone Fission Hydroplant rotation in Splatoon 3 will reward the player with special badges that they can use on their Splashtag.

The stage's name is a play on the phrase "gone fishin'", and references both hydropower energy and nuclear fission.