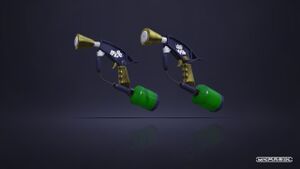 The Enperry Splat Dualies are a classic slayer weapon more focused on mobility than splatting power than its cousin, the Tentatek Splattershot.

Unless an Enperry Splat Dualies user is on an extended splatting streak, they can expect to get splatted often. When equipped, Comeback grants 10 ability points of six different stackable abilities for twenty seconds after respawning from getting splatted by an opponent:

Ink Saver (Main) and Swim Speed Up are the most useful for the wielder, allowing them reduce the amount of ink consumed by dodge rolls (9% to 7.77%) and more quickly pursue and pressure the opponent upon returning from spawn. Special Charge Up also allows the wielder to obtain Inkjet faster on respawn.

As a short-ranged weapon that excels at flanking, the Enperry Splat Dualies greatly benefits if it is able to swim faster. Swim Speed Up enables its user to more quickly close the distance towards an opponent, more quickly respond to an opponents' push, or even escape unfavorable situations.

Not only does this help with strafing during combat, and improves movement, but it also boosts the speed of the Inkjet.

Mainly used to reduce ink consumption for rolls, as they use 7% of the ink tank.