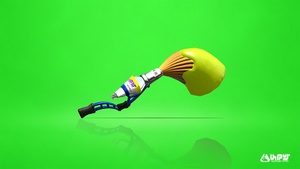 Just like the Inkbrush and the Permanent Inkbrush, the Inkbrush Nouveau is the fastest, most mobile weapon in Splatoon 2, enabling its user to quickly flank opponents, harass them, and escape unfavorable situations. While its lack of a bomb limits its user's options on defense, unlike the Vanilla variant, it has a special weapon that provides better survivability, allowing it to turn the tables on an otherwise unfavorable matchup.

The Inkbrush Nouveau's mobility makes it suitable as a skirmisher:

Another weakness of the Inkbrush Nouveau's kit is that Ink Mines cannot be thrown and cannot inflict lethal damage, making them less versatile than most bombs — particularly either Splat or Suction Bombs, which provide their user's team a couple advantages over another team that has no lethal bombs in its composition.[7]

Ever since its introduction in Version 4.3.0, Bomb Defense Up DX will not only reduce the damage taken from opposing sub and special weapons that are not one-hit-splat but will also reduce the duration of the tracking effects of certain opponent's sub and special weapons, such as Point Sensors and Ink Mines, allowing the user of this ability to evade detection more easily. This is a useful ability for almost any player, including an Inkbrush Nouveau player who can play aggressive when needed. Just one sub, or three ability points, offers plenty of utility:[8][9]

Although the Inkbrush line prevents its users from taking damage from enemy ink on the floor while rolling, they can still be expected to come in contact with the opponent's ink on various surfaces, which can both be damaging and reduce mobility. Ink Resistance Up not only partially offsets the reduction in mobility but also delays the damage taken from contact with opposing ink.[8][9] Just one sub, or three ability points…

Because the Inkbrush Nouveau does 30 damage and has extremely short range, falloff damage can often occur. Object Shredder provides its user a valuable damage boost against opponents using either Ink Armor or Baller. Its only drawback is that it occupies an entire main ability, reducing the amount of ability points allowed for other potentially important gear abilities, such as Special Charge Up or Quick Respawn.

Quick Super Jump decreases both the "charge" time before and the travel time of a Super Jump. A Splattershot Jr. player will be outmatched by most opponents, and Quick Super Jump can help them escape unfavorable situations more quickly, which avoids getting splatted, maintains a presence on the stage, and preserves precious special gauge progress.[8][9]

Special Charge Up accelerates building up the special gauge for Baller. Since the Inkbrush Nouveau relies on its Baller often for survivability, having it readily available is rather important.

A self-explanatory ability, Swim Speed Up enables an already mobile Inkbrush Nouveau user to more rapidly close the distance towards an opponent, more quickly respond to an opponents' push, or even escape unfavorable situations.