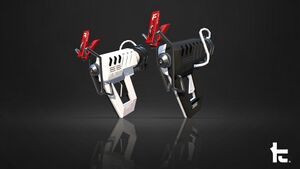 Like its Vanilla and Deco variants, the Kensa Glooga Dualies are dualies with the unique trait of increasing their range and damage after a dodge roll. While they do have what could be considered the best kit in the game, the main weapon does not match its kit's playstyle. As a result, the Kensa Glooga Dualies are used to both support their team with their kit, and splat opponents with their main weapon.[1]

The Kensa Glooga Dualies can be used as a slayer as well as a support:

Fizzy Bombs can provide great coverage and pressure with splash hits, even in stages and areas that are more open:

Ink Armor protects its user and all of their active teammates, reducing their chances of getting splatted and allowing them to either initiate a push – to recapture a Splat Zone for example – or maintain one, such as while locking out the opponent.

Because the Kensa Glooga Dualies are generally poor at turfing, their users will have to rely on their teammates to maintain map control. Not having enough turfing ability presents its own set of problems:[4]

Multiple Ink Armors used by the same team do not stack. Therefore, it would be redundant for a team to have more than two Ink Armor users.[4]

A Kensa Glooga Dualies user in a slayer role generally gets close enough to the opponent and their bombs. Ever since its introduction in Version 4.3.0, Bomb Defense Up DX will not only reduce the damage taken from opposing sub and special weapons that are not one-hit-splat but will also reduce the duration of the tracking effects of certain opponent's sub and special weapons, such as Point Sensors and Ink Mines, allowing the user of this ability to evade detection more easily. Just three ability points, or one sub, offer plenty of utility:[5][6]

Any good slayer like a Kensa Glooga Dualies user is expected to come in contact with the opponent's ink on various surfaces, which can both be damaging and reduce mobility. Ink Resistance Up not only partially offsets the reduction in mobility but also delays the damage taken from contact with opposing ink.[5][6]

The Kensa Glooga Dualies can greatly benefit from the reduced ink consumption of both the main and sub weapon, allowing the user to spam Fizzy Bombs during either a crucial defensive stand or a late attempt to reclaim the lead.[5]

Special Charge Up accelerates building up the special gauge for Ink Armor. Since farming Ink Armor is one of a few roles of the Kensa Glooga Dualies, constantly having Ink Armor available for teammates ensures more successful pushes and counter-pushes.[5]