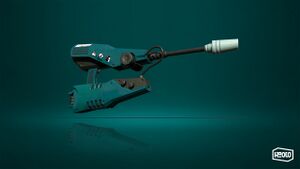 The Jet Squelcher returns from the original Splatoon, fulfilling a similar role as before: a long-ranged, turfing special weapon farmer. While it lacks both the one-hit-splat and range of a charger and the raw firepower of a splatling, it does not require any charging time, making it more mobile than most anchor's weapons, enabling its user to more readily move up with their teammates.

The long range, turfing, and special weapon output enable the Jet Squelcher to serve as both as an anchor and a support:

The Jet Squelcher's long range and good turfing allow it to provide support fire and help maintain maintain map control. Therefore, it is generally redundant to have more than one long-ranged weapon on a team for a few reasons:[8]

The Jet Squelcher's lack of lethal bombs can also be a liability to a team composition. Lethal bombs – particularly either Splat or Suction Bombs – provide their user's team a couple advantages over another team that has no lethal bombs in its composition:[8]

With its strengths and weaknesses, a Jet Squelcher user would benefit from having one teammate using a mobile weapon to lead pushes and another with lethal bombs in their kit:[9]

While having multiple players on the same team launching Tenta Missiles might seem like a fun and easy means to cause opponents to scramble for cover, having too many players equipped with them – no more than one or two – can reduce the effectiveness of a team composition:[8]

An opposing Jet Squelcher user provides range and constant Tenta Missles to pressure your team's ability to maintain map control. Splatting them – or at least forcing them to retreat – will relieve this pressure and enable your team to reclaim territory.

Ever since its introduction in Version 4.3.0, Bomb Defense Up DX will not only reduce the damage taken from opposing sub and special weapons that are not one-hit-splat but will also reduce the duration of the tracking effects of certain opponent's sub and special weapons, such as Point Sensors and Ink Mines, allowing the user of this ability to evade detection more easily. Since the Jet Squelcher is prone to being attacked by bombs and Tenta Missiles due to it being an anchor, having this ability is great for improving its survivability. Just three ability points, or one sub, offer plenty of utility:[11][12]

A Jet Squelcher user will inevitably come in contact with the opponent's ink on various surfaces — mostly resulting from opposing bombs and Tenta Missiles, which can both be damaging and reduce mobility. Ink Resistance Up not only partially offsets the reduction in mobility but also delays the damage taken from contact with opposing ink:[11][12]

Main Power Up increases the range of the Jet Squelcher slightly by up to 8.5% and accuracy by up to 30%. Main Power Up can be used to allow more consistent splats and to gain a slight advantage of range against chargers and splatlings.

The Jet Squelcher benefits most from the second buff, allowing it to consistently break Ink Armor in one hit - particularly with Tenta Missiles, as opponents wearing one sub of Bomb Defense Up DX will not have Ink Armor broken by Tenta Missile splash damage otherwise.

Quick Super Jump decreases both the "charge" time before and the travel time of a Super Jump, allowing its user to escape more quickly. A Jet Squelcher is more capable of fighting for itself than other backlines, but sometimes it is best to jump out to preserve special gauge progress.

Accelerates building up the special gauge for Tenta Missiles. As one of its main advantages being able to spam Tenta Missiles, constantly having Tenta Missiles available can help for pushes and pressuring opponents.

Not recommended. Ink Saver (Main) has poor stacking with the Jet Squelcher.

For most of the game's lifespan, the Jet Squelcher saw little to no competitive presence. This was due to it being seen as largely inferior to its Custom variant, which was considered to have a better kit. At the time, Tenta Missiles were often considered one of the worst specials in the game,[16] and after its numerous buffs, other Tenta Missile weapons became popular instead throughout the 4.0 to early 5.0 patches, such as the Mini Splatling, Kensa Splattershot, and Bamboozler 14 Mk I. The weapon remained on the low end of many tier lists from competitive players such as Sendou, Sorin, and Chara throughout all of these different versions.[17][18][19][20]

The latter end of the 5.0 patches, starting with the end of patch 5.3.1, saw a change in the Jet Squelcher's perception as the weapon won in the Japanese Splat Zones tournament, Area Cup, as well as the Splatoon Amateur Circuit, a low-level tournament, in January 2021.[21][22] In Chara's 5.3.0 tier list, he noted the weapon's long-distance pressure, walling capabilities, and ability to spam Tenta Missiles, placing it in the high tiers. However, he also mentioned that the weapon was held back by its sub weapon.[22]

As the Kensa .52 Gal rose to the top of the game's meta by 5.5.0, so did the need for Tenta Missiles to dislodge it and break through its defenses, and the Jet Squelcher was one of the best weapons for spamming them due to nerfs to other options like the Dualie Squelchers and Bamboozler, as well as its range allowing it to paint for them while not taking away the paint of its teammates.[1] Chara noted in his 5.5.0 tier list how the weapon can easily pressure other backlines due to its Tenta Missile output, as well as turf more than them.