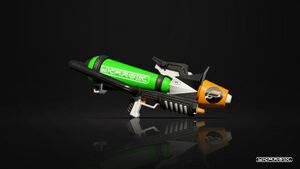 The Forge Splattershot Pro is often seen as a beginner's Foil Squeezer, or for those who are unable to mash buttons[3]. While it has less range, turfing, and accuracy than the Foil Squeezer, it does not require continuous presses of

Bubbles launched from the Bubble Blower can turf surfaces and splat opponents when popped, but they are even better at providing protection:

The Forge Splattershot Pro's long range and high damage allow it to provide support fire and help maintain spatial control, despite its lack of turfing compared to most of the other weapons of a team's composition. Therefore, it is generally redundant to have more than one long-ranged weapon on a team for a few reasons:[8]

Because the Forge Splattershot Pro is inefficient at turfing, its user will have to rely on their teammates to maintain map control. Not having enough turfing ability – usually from having too many blasters and chargers – presents its own set of problems:[8]

Bubble Blower is great for either initiating a push into contested territory or repelling the opponents' push. However, it is neither a very reliable means of turfing territory – such as a Splat Zone – nor always a dependable means to splat opponents — particularly ones with longer-ranged weapons. Therefore, it would be redundant to have two Bubble Blower users in a team composition:[8]

A Forge Splattershot Pro user can expect to come in contact with the opponent's ink on various surfaces, which can both be damaging and reduce mobility - especially since this weapon has poor turfing ability. Ink Resistance Up not only partially offsets the reduction in mobility but also delays the damage taken from contact with opposing ink.[10][11]

Main Power Up increases damage for the main weapon. If enough is used, the damage can reach to 49.9, making it close to a two hit splat. If an opponent touches enemy ink for more than one frame, then the Forge Splattershot Pro will be able to splat the opponent in two hits. However, due to the major commitment in gear space required for this ability so the weapon does 49.9 damage in addition to the abilities required for a typical weapon with Bubble Blower, Main Power Up is not recommended for this weapon. A gearset with Main Power Up is more suited for the Kensa Splattershot Pro due to it being more combat-oriented.

At version 3.3.0, while still not the best, the Forge would be ranked as moderate, with competitive players such as Sorin ranking it moderately on his tier list[15]. Thoughts on the weapon throughout version 4.0.0 would stay the same with Sorin placing it near the same place. The Forge at version 4.0.0 would be one of the few times it was superior to the Foil Squeezer[16]. From version 4.6.0 to version 4.8.0 the weapon would still stay near the same place, with Chara placing it at similar places. Because the weapon had to either devote gear space to either Main Power Up or Special Power Up and Object Shredder, the weapon would be missing out on one advantage, which made the weapon inferior as the other variants, which could devote gear space to Main Power Up without problems.[17]

Around version 5.0.0 the ability to instapop bubbles discovered. Because of it's gear devotion problem, the Forge would not be used often around here and would be bested by the Foil Squeezer, which does not need a potential two shot in order to be effective. Chara would put the Forge at version 5.3.0 slightly lower than before with the same gear problem and because of the Foil Squeezer.[18]. At version 5.5.0 the weapon would stay the same with the same problems as before. Here, the Forge would be placed higher than its vanilla variant.[19]