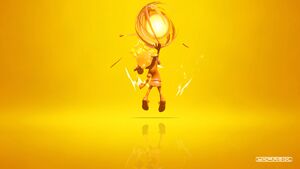 Introduced in 4.1.0, the Booyah Bomb is a new special with an effect similar to that of Inkstrike back in Splatoon, albeit with a different means of execution: a giant explosion of ink that turfs a large portion of the stage, diffuses opposing sub weapons and bubbles, and rapidly damages and splats any opponents caught within its blast. Unique from other specials is the ability for teammates to help its user charge the special to hasten its launch.

While Booyah Bomb is capable of both splatting opponents and turfing surfaces it comes in contact with, it is not necessarily the best special weapon at either task. Therefore, it is advised to have other special weapons available to fill those specific roles whenever necessary, as having too many users of Booyah Bomb in a team composition will limit a team's arsenal of weapons:[2]