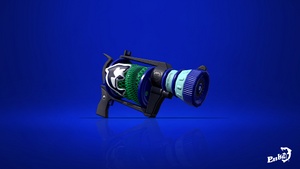 Increases main weapon damage up to 33.3 per shot. The L-3 Nozzlenose D is a weapon that has a close potential for a three hit splat, or a one hit splat per

Allows the user to potentially roll away from enemy fire after Super Jumping, including notably after the Inkjet has expired. It also gives them a mobility boost for 3 seconds in the form of 10 AP of Run Speed Up, Swim Speed Up, and Ink Resistance Up.