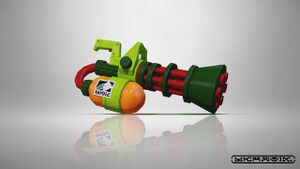 The Zink Mini Splatling is seen as one of the best weapons in the game. The weapon can get Bubblers quickly and be aggressive with Disruptors as well. The weapon's one drawback is its high special depletion, punishing users who get splatted.

With medium range and incredible turfing, the Zink Mini Splatling is a support weapon, but its kit allows it to function as a slayer:

Disruptor while not as versatile as a bomb, can provide a Zink Mini Splatling user with many advantages.

The Zink Mini Splatling's thorough turfing and medium range make it a good complement to a teammate with a short- to medium-ranged weapon that has difficulty turfing, such as a Splattershot Pro or a blaster.

Being a splatling, the Zink Mini Splatling will often come into contact with enemy ink on the ground while strafing, which can cripple its mobility. Ink Resistance Up will allow for better mobility in these situations. 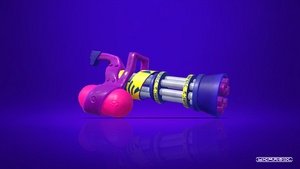 Compared to its Splatoon incarnation, the Zink Mini Splatling received multiple changes, both good and bad, to its performance:

While the Zink Mini Splatling's Curling Bombs are invaluable for mobility and confirming splats, they lack certain advantages offered by lethal bombs — particularly either Splat or Suction Bombs, which provide their user's team a couple advantages over another team that has no lethal bombs in its composition:[5]

Ink Storm is intended for either contesting territory, such as Splat Zones, or stalling opponents' pushes but is not as reliable at splatting opponents who actively avoid the Storm. Therefore, it is advised to have other special weapons available to complement Ink Storm, as having too many users of any combination of Ink Storm and Bomb Launcher (no more than two) in a team composition will limit a team's arsenal of weapons:[5]

Upon contacting opposing ink on any surface, damage is taken, and the movement speed of a Zink Mini Splatling user is reduced to 0.24 units per frame. Ink Resistance Up both delays and reduces the damage taken and increases the running speed while in opposing ink.[6][9]

Special Charge Up accelerates building up the special gauge for Ink Storm, which can help initiate a push or disrupt an opponent's push.[6]