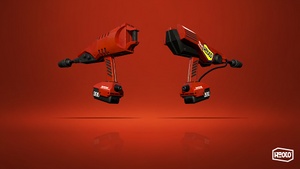 Similarly to the Dualie Squelchers, the Custom Dualie Squelchers are a versatile pair of mid-ranged dualies, boasting the longest range out of their class. This variant's kit is more centered around area denial and zoning out opponents.

The versatility of the Custom Dualie Squelchers accommodates both a slayer and a supportive playstyle:

The Splat Bomb is a powerful, versatile sub weapon with a variety of purposes suited for either a slayer or support player:

The Custom Dualie Squelchers are very versatile and can slot into almost any team composition. However, sometimes they struggle to fight due to their relatively low damage,[5] and they cannot farm their special weapon as often as other weapons can.

Ink Storm is intended for either contesting territory, such as Splat Zones, or stalling opponents' pushes but is not as reliable at splatting opponents who actively avoid the Storm. Therefore, it is advised to have other special weapons available to complement Ink Storm, as having too many users of any combination of Ink Storm and Bomb Launcher (no more than two) in a team composition will limit a team's arsenal of weapons:[9]

While the mobile, mid-ranged Custom Dualie Squelchers can keep their user safe from many direct engagements, there will still be times when they will still take splash damage from opponents' bombs thrown in their direction. Ever since its introduction in Version 4.3.0, Bomb Defense Up DX will not only reduce the damage taken from opposing sub and special weapons that are not one-hit-splat but will also reduce the duration of the tracking effects of certain opponent's sub and special weapons, such as Point Sensors and Ink Mines, allowing the user of this ability to evade detection more easily. Just three ability points, or one sub, offer plenty of utility:[10][11]

Dodge rolling with the Custom Dualie Squelchers is an easy way to move about the stage, but it also increases the chances of coming in contact with the opponent's ink on various surfaces, which can both be damaging and reduce mobility. Ink Resistance Up not only partially offsets the reduction in mobility but also delays the damage taken from contact with opposing ink:[10][11]

Ink Saver (Sub) allows more frequent use of Splat Bombs and saves ink for the main weapon after each Splat Bomb used. While a Custom Dualie Squelchers user with a slayer build would focus more on Main Power Up, one seeking a supportive build can benefit from being able to spam Splat Bombs.[10]

Object Shredder is a shoe exclusive main ability that will be helpful for supportive Custom Dualie Squelchers builds:

Not recommended. While this may seem useful, using rolls, or painting a path and swimming, will get the user farther than Run Speed Up could, as even stacking three mains of Run Speed only sees a minimal distance increase for shooting while firing, which is the main usage of Run Speed. (0.72 DU/f compared to 0.86 DU/f)[13]