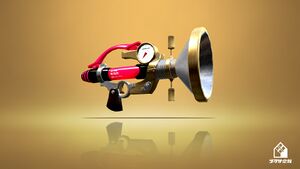 The Sploosh-o-matic is a very mobile, rapid-firing, but very short-ranged weapon with a high rate of damage. Unlike its more popular counterpart, the Sploosh-o-matic 7, it struggles more as a slayer due to its worse kit and is commonly seen as one of the worst weapons in the game by competitive players.[2][3] This weapon lacks a throwable bomb to poke with in neutral or attack from far away, and the special is much less reliable.

While the Sploosh-o-matic is a slayer's weapon, its lack of range and accuracy forces it to be played differently from how typical slayer's weapons are played:

The specific weaknesses Splashdown has compared to other special weapons reduces its effectiveness if possessed by more than one player in a team:[5]

Ninja Squid reduces detection by opponents while swimming on non-vertical surfaces. It allows its user to swim at full speed undetected at the cost of about 20% of the maximum swimming speed as of Version 3.0.0. Because a Sploosh-o-matic user has difficulty attacking most opponents head-on, Ninja Squid can make it easier for its user to shark and more safely approach opponents.

As a short-ranged weapon that excels at flanking, the Sploosh-o-matic greatly benefits if it is able to swim faster. Swim Speed Up enables its user to more quickly close the distance towards an opponent, more quickly respond to an opponents' push, or even escape unfavorable situations.

Not recommended. The Sploosh-o-matic already gets Splashdown fast enough due to its good painting ability and low special cost, but Splashdown isn't a special worth dedicated gear abilities to.