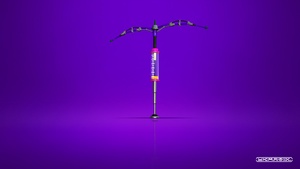 Returning from Splatoon, the Splash Wall fulfills the same function in Splatoon 2: restricting opponents' movement and blocking opposing fire. While it lost the ability to instantly splat opponents, ever since Version 3.0.0, its user may now place a new wall before the previous one is either depleted or destroyed. The introduction of brellas does not reduce the value of Splash Walls, which can actually counter them and quickly destroy their shields.

A Splash Wall is great for protection from opposing fire and impeding opponents' movement. However, if the opponent is not compelled to contest your position (e.g., maintaining a lockout), a Splash Wall is less versatile than most bombs, which can be used to poke at the opponents. Therefore, if one member of a team has a kit with Splash Wall, it is advised for one of their teammates to have lethal bombs in their kit. Splat or Suction Bombs provide its user's team many advantages over another team that has no lethal bombs in its composition:[6]

Weapon kits that include Splash Wall enable their users to restrain the opponents' movement and spatial control, especially in closed areas with fewer alternative routes, making it easier for their teammates to maintain map control. How each weapon user employs Splash Wall to aid in this role depends on the characteristics of their main weapon:

While thought of as a personal protection aid, a Splash Wall can also provide protection for teammates, especially those whose roles require them to remain in one general area, such as an anchor using an E-liter 4K, an Explosher, or a Hydra Splatling.

An opponent's Splash Wall is often a hindrance, but it can be worked around: