For information about the Slosher, see Slosher. 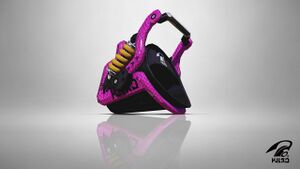 Compared to its appearance in Splatoon 2, the Slosher has only minor tweaks to its performance.

Burst Bombs are the centerpiece of this weapon's kit, giving it user plenty of uses:

Inkstrike, while not as useful as a Kraken or Bubbler, still has some uses.

While the Slosher's Burst Bombs combo excellently with the weapon, they lack certain advantages offered by lethal bombs — particularly either Splat or Suction Bombs, which provide their user's team a couple advantages over another team that has no lethal bombs in its composition:

Inkstrike, while already does not benefit as much to a Slosher user, will not be as useful to a team if there are many players using it for a few reasons:

Damage Up significantly improves the consistency of the weapon's Burst Bomb combos.

Burst Bombs have better stacking with Ink Saver (Sub) than in Splatoon 2, allowing its users to save more ink with each Burst Bomb thrown. This is particularly helpful for a Slosher, which relies on its Burst Bombs often. 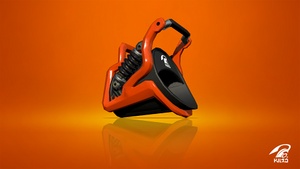 The Slosher – along with the Hero Slosher Replica – is the first available weapon in the Slosher class. Its unique mechanics differ greatly from those of a shooter but allow it to more easily hit certain targets that a shooter cannot easily reach, such as an opponent hiding behind an obstacle.

The Slosher has the traits of a powerful slayer's weapon: high damage and medium range. However, its kit allows it to also play a supportive role as well.

The Slosher is less capable of playing aggressively than its other variants, particularly the Soda Slosher, but it is more versatile, allowing it to play in ether an aggressive or supportive role. While it is not quite as versatile as some other weapons, such as the Kensa Splattershot, the Slosher can still fit in many team compositions.

A Slosher user in a slayer role generally gets close enough to the opponent and their bombs. Ever since its introduction in Version 4.3.0, Bomb Defense Up DX will not only reduce the damage taken from opposing sub and special weapons that are not one-hit-splat but will also reduce the duration of the tracking effects of certain opponent's sub and special weapons, such as Point Sensors and Ink Mines, allowing the user of this ability to evade detection more easily. Just three ability points, or one sub, offer plenty of utility:[15][16]

Unless a Slosher wielder is on an extended splatting streak, they can expect to get splatted often. When equipped, Comeback grants 10 ability points of six different stackable abilities for twenty seconds after respawning from getting splatted by an opponent:

Because the Slosher consumes ink quickly, both Ink Saver (Main) and Ink Saver (Sub) are the most useful for a Slosher user, allowing them to pursue and pressure the opponent upon returning from spawn with less worry about their ink efficiency.[15]

Any good slayer like a Slosher user is expected to come in contact with the opponent's ink on various surfaces, which can both be damaging and reduce mobility. Ink Resistance Up not only partially offsets the reduction in mobility but also delays the damage taken from contact with opposing ink.[15][16]

The Slosher can greatly benefit from both the overall reduced ink consumption and quicker ink recovery, allowing its user to more freely use either the main weapon or Suction Bombs during either a crucial defensive stand or a late attempt to reclaim the lead.[15]

Quick Super Jump decreases both the "charge" time before and the travel time of a Super Jump. Both aggressive and supportive Slosher users will benefit since Quick Super Jump allows them to both return to the front lines more quickly and escape unfavorable situations more easily to preserve special gauge progress.[15][16]

Super Jumping to a teammate after respawning carries the risk of getting splatted upon landing, due to the appearance of a Super Jump indicator. When equipped, Stealth Jump better covers this indicator from long distance opponents, allowing its user to more safely return to the front lines and maintain pressure on the opponent.[15][16] [20]