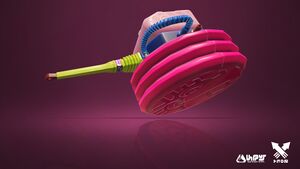 The Ultra Stamp is one of the rarest specials in Splatoon 2, only appearing on five weapon sets. Similarly to Inkjet, it is an aggressive special primarily found on slayer weapons that takes a lot of time to master.

The Ultra Stamp is unique among other specials due to having three options for attacking opponents, with each method of attack having their own utility.