For information about the Blaster, see Blaster. 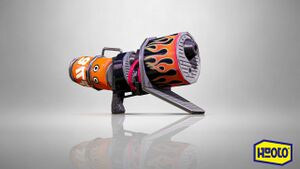 The Blaster is different than its appearance in Splatoon 2

Disruptor while similar to Toxic Mist works differently than the other, which can provide a Blaster user with many advantages.

Damage Up increases damage of the main, sub, and special weapon. It is possible for a Blaster user to reach splash damage of 99.9 damage, splatting opponents who are slightly damaged from enemy ink. 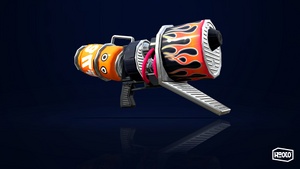 The Blaster and its reskin, the Hero Blaster Replica, are categorized as shooters by the game. However, the shots fired from this weapon have different properties than that of a standard shooter.

The Blaster is a slayer weapon with a unique playstyle compared to a standard Splattershot, with an emphasis on rewarding good positioning.

The Blaster's lack of lethal bombs can also be a liability to a team composition. Lethal bombs – particularly either Splat or Suction Bombs – provide their user's team a couple advantages over another team that has no lethal bombs in its composition:[4]

Quick Respawn shortens respawn time after getting splatted (under specific conditions). Like other slayer weapons, the Blaster benefits from abilities that promote aggressive play, such as Quick Respawn and Stealth Jump.

Stealth Jump hides its user's Super Jump landing marker from opponents (and allies) who are not too close to it — about three tile lengths in the middle of Inkblot Art Academy.[6] This encourages its user to Super Jump back to the frontlines more often.