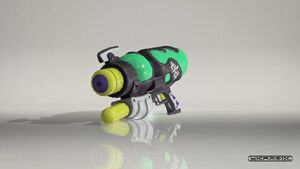 Splattershot Nova is an all-new middleweight Shooter produced by Splat. The weapon's range itself is nearly on par with its older cousin, the Splattershot Pro, but with better mobility when firing and painting in exchange for less accuracy and damage.

The Nova's main goal as a weapon is to provide support fire to frontlining teammates with its tiny bits of chip damage.

Killer Wail 5.1 provides the Splattershot Nova with extra chip damage to help it engage with opponents, either itself or its teammates for a short duration

The Splattershot Nova's lack of lethal bombs can also be a liability to a team composition. Lethal bombs – particularly either Splat or Suction Bombs – provide their user's team a couple advantages over another team that has no lethal bombs in its composition:[1]

Other specials like Big Bubbler can bolster a team's ability to either make a push or counter the opponent's push:

Using Quick Super Jump allows Nova users to more easily return and retreat to or from the battles.

Every player, including a Nova user, is expected to come in contact with the opponent's ink on various surfaces, which can both be damaging and reduce mobility. Ink Resistance Up not only partially offsets the reduction in mobility but also delays the damage taken from contact with opposing ink:

The Splattershot Nova isn't really an ink-hungry weapon, but when equipped, Last-Ditch Effort grants 24 ability points of three different stackable abilities for the last 30 seconds, or when the ranked score is 50 or below. These abilities include:

Thermal Ink is a natural choice, as Nova is a long ranged weapon that doesn't have good damage can help locate players behind walls, thus allowing you to throw Point Sensors to reveal their location for the rest of the team.

Super Jumping to a teammate after respawning carries the risk of getting splatted upon landing, due to the appearance of a Super Jump indicator. When equipped, Stealth Jump better covers this indicator from long-distance opponents, allowing its user to more safely return to the front lines and maintain pressure on the opponent. It's not a bad choice, but there's still better abilities for its shoe slot.

Like with Stealth Jump, Drop Roller makes Super Jumping to a teammate less risky. Like Stealth Jump, it's not a bad ability for its shoe slot but there's better ones.

As a support weapon, the Splattershot Nova greatly benefits if it is able to swim faster. Swim Speed Up enables its user to more quickly close the distance towards an opponent, more quickly respond to an opponent's push, or even escape unfavorable situations.

While not as useful as Last-Ditch Effort, if one dies from an enemy, for 20 seconds after you respawn, you gain 6 abilities worth ten ability points of

This can be used to get more specials out, or if you don't really need to rely on LDE's effects as much.

Mostly useful in Rainmaker, this ability helps to destroy barriers such as the Big Bubbler and Rainmaker barrier or to break some special weapons including the Crab Tank and Wave Breaker.

It's an OK ability, but not the best for Nova. If you use it, it's more supposed to be an approach option.

In recent times, it's been shown that Intensify Action can be great for increasing Nova's mobility and increasing jump accuracy.

An amazing choice. Splattershot Nova's paint is great, however with a 200p special, getting special can be tedious.

Tenacity is another choice to use when it comes to getting special. In tangent with Special Charge Up, overall, Tenacity gradually fills the special gauge only when the user's team has fewer active players than the opponent's team.

An interesting ability that (in theory) could work for Splattershot Nova. It's an alternative to Thermal Ink and helps whenever. When you die to an opponent, the opponent that splatted you will be outlined like Thermal Ink. But, this is for the entire match until you splat them back, which can be useful for callouts from halfway across the map.