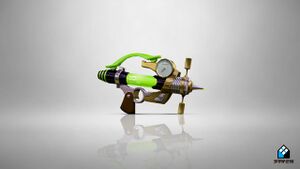 The Splash-o-matic has some differences compared to its Splatoon 2 appearence.

The Bomb Rush is very effective at contesting territory, such as Splat Zones, but is not as reliable at splatting opponents who actively avoid the bombs. Attempting to pursue certain opponents with Bomb Rush active further risks getting splatted. Therefore, it is advised to have other special weapons available to complement Bomb Rush, as having too many users of any Bomb Rush variant (no more than two) in a team composition will limit a team's arsenal of weapons:

Coordinating with your teammates can greatly increase the Bomb Rush's effect during a battle:

Because the Splash-o-matic has a shorter range than most shooters, the suction bombs can also be used to take out enemies that might be lurking out of the main weapon's range. Bomb Range Up will increase the distance the bombs travel when thrown.

Cold Blooded is an ability that shortens the duration of position-tracking to 50% of normal tracking time. As a stealthy, mobile weapon, Cold Blooded is immensely useful for the Splash-o-matic, enhancing its sneakiness, facilitating ambushes, preventing enemy ambushes, enabling more mobility, and preventing chargers to quickly splat players.

Comeback allows players to get back faster into the battle and constantly have a boosted range of abilities at hand, further charging Special Charge after special loss from death as well.

Ink Recovery Up allows players to constantly throw Suction Bombs and have a frequent presence on the map.

Special Charge Up and

With the weapon's fast and effective ink output, Special Charge Up allows players to have frequent Suction Bomb Rushes at hand, a valuable tool for aggressive and defensive plays alike. Special Saver will conserve a significant amount of the special gauge after being splatted by an opponent, so Bomb Rush can be used more often.

The Swim Speed Up ability allows players to swim faster, which makes harder target to kill and much more mobility when moving in squid form. 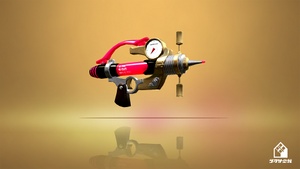 The Splash-o-matic is a short-ranged, rapid firing weapon with the best accuracy among all shooters, excluding Blasters and Semi-Automatic weapons. It also has the lowest special gauge requirement for Inkjet, tied with the Octobrush, the Herobrush Replica, and the Custom Goo Tuber, allowing it to farm Inkjet very quickly.

The traits of the Splash-o-matic make it a slayer's weapon:

The Splash-o-matic's rapid turfing and low special gauge requirement allows it to farm and spam Inkjet more often than almost all other weapon kits with Inkjet. However, proper piloting is still required to take full advantage of this ability:

The Splash-o-matic has two drawbacks that have to be compensated for by the other three weapons of its team composition: short range and lack of lethal bombs.[4]

The Splash-o-matic's rapid turfing and farmable Inkjet means that a fellow slayer does not necessarily need to turf or build up their specials as often, freeing them to use other complementary weapons:

Like other weapon kits with Inkjet, the Splash-o-matic greatly benefits from a teammate's Ink Armor:

As a short-ranged slayer's weapon, the Splash-o-matic requires its user to be in close quarters with the opponent, who might be inclined to use bombs for zoning out the Splash-o-matic user. Ever since its introduction in Version 4.3.0, Bomb Defense Up DX will not only reduce the damage taken from opposing sub and special weapons that are not one-hit-splat but will also reduce the duration of the tracking effects of certain opponent's sub and special weapons, such as Point Sensors and Ink Mines, allowing the user of this ability to evade detection more easily.

Any good user of a short-ranged weapon like the Splash-o-matic is expected to come in contact with the opponent's ink on various surfaces, which can both be damaging and reduce mobility. Ink Resistance Up not only partially offsets the reduction in mobility but also delays the damage taken from contact with opposing ink.

With a base damage of just 28 HP per shot, the Splash-o-matic is one of the weakest slayer's weapons in Splatoon 2. Fortunately, it is also one of the few weapons whose damage can be increased with Main Power Up, increasing its effectiveness as a slayer's weapon.

Ninja Squid reduces detection by opponents while swimming on non-vertical surfaces. It allows its user to swim at full speed undetected at the cost of about 20% of the maximum swimming speed as of Version 3.0.0. Because a Splash-o-matic user has difficulty attacking most opponents head-on, Ninja Squid can make it easier for its user to shark and more safely approach opponents.

As a short-ranged weapon that excels at flanking, the Splash-o-matic greatly benefits if it is able to swim faster. Swim Speed Up enables its user to more quickly close the distance towards an opponent, more quickly respond to an opponents' push, or even escape unfavorable situations. 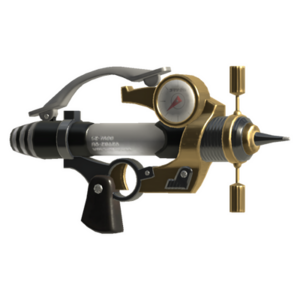 
Normally, having too many short-ranged weapons on a team would be a detriment for the following reasons:[7]

However, the Crab Tank on the Splash-o-matic effectively turns the user into a long-ranged weapon and can apply strong pressure on the opposing team.


Burst Bombs are not lethal bombs, but their effectiveness increases with higher numbers,[8] comboing with each other, Crab Tank explosives, and allowing for long-range poking the weapon couldn't do otherwise without its special. Weapons that can take advantage of the instant splash damage such as other Splash-o-matics or a Sloshing Machine pair well with Burst Bombs.


Crab Tank also allows the Splash-o-matic to synergize with itself on a team composition,[9] and using multiple Crab Tanks is not an uncommon strategy. The special keeps the user alive while the other Splash-o-matics can get their own Crab Tanks, while also having Burst Bombs to combo with the current active Crab Tank. It is possible to chain Crab Tanks one after the other to apply pressure for an extended period of time on the opposing team. However, keep in mind that Crab Tank is a fairly static special and its effectiveness can vary on modes such as Tower Control and Rainmaker.[10]

The Splash-o-matic was assumed to be a strong weapon even before release,[11] and this prediction has held up very well. Recently following the release of 1.2.0, the Splash-o-matic has become more popular than before, with many teams running two Splash-o-matics in their team compositions.[12][13] This can be attributed to nerfs to the Sloshing Machine and Fizzy Bombs and improvements to the netcode, as well as its special; the Splash-o-matic is arguably the best weapon with Crab Tank currently and can reliably get it due to good turfing, allowing it to pressure long-ranged threats for a considerably long period of time.