For information about the Squeezer, see Squeezer. 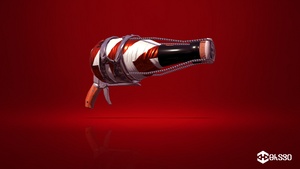 Increases semiautomatic mode damage up to 49.4.

Like in Splatoon 2, all the above applies, however Squeezer can take on more aggressive positions thanks to its less backline oriented playstyle because of it's special Trizooka. Squeezer now plays similarly to its Foil variant in Splatoon 2; a midline slayer. It can remain at long distances to provide support fire with the main weapon or special to pressure out or splat backline and other longer-ranged offenders like chargers, Jet Squelcher and anchoring Splatlings. (i.e Heavy Splatling, Ballpoint Splatling, Hydra Splatling) There's not much else to be said about Squeezer, the basics and fundamentals are still there from Foil Squeezer.

The Squeezer's lack of lethal bombs can also be a liability to a team composition. Lethal bombs – particularly either Splat or Suction Bombs – provide their user's team a couple advantages over another team that has no lethal bombs in its composition:[1]

Trizooka is Squeezer's jack-of-all-trades special. Trizooka's main benefit on Squeezer is to splat and/or pressure backlines and other threats of similar ranges to it and allow them to displace themselves or get picks. Pressure also applies to any threats from far away. Trizooka can still be really useful in mid if their in their court or far enough away from mid to provide the same coverage.

Using Quick Super Jump allows Squeezer users to more easily return and retreat to or from the battles.

Every player, including an Squeezer user, is expected to come in contact with the opponent's ink on various surfaces, which can both be damaging and reduce mobility. Ink Resistance Up not only partially offsets the reduction in mobility but also delays the damage taken from contact with opposing ink:

Squeezers are an ink-hungry weapon. When equipped, Last-Ditch Effort grants 24 ability points of three different stackable abilities for the last 30 seconds, or when the ranked score is 50 or below. These abilities include:

As a slayer weapon, the Squeezer greatly benefits if it is able to swim faster. Swim Speed Up enables its user to more quickly close the distance towards an opponent, more quickly respond to an opponents' push, or even escape unfavorable situations.

Object Shredder is useful everywhere. This ability helps to destroy barriers such as the Big Bubbler and Rainmaker barrier or to break some special weapons including the Crab Tank and Wave Breaker, which includes Trizooka blasts to deal massive damage from afar.

Run Speed is an awesome ability for Squeezer. Run Speed increases its mobility and since Squeezer isn't too gear dependent, Run Speed makes for great filler

Haunt is extremely useful for callouts and general usage for when after you die. You can then find the person who splatted you and call out to tell positioning from anywhere on the map from behind walls, for your team to splat them or you splatting them yourself.

A not bad idea at all. Respawn Punisher pairs nicely with Tacticooler weapons as you get all the benefits from the cooler as of version 2.1.0. It allows you to play a more anchorish playstyle as it involves you staying back more.