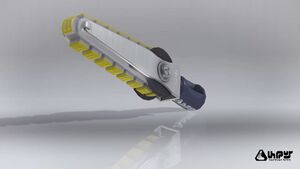 Splatana Stamper is a middleweight Splatana produced by Nouveau. It has less strafing speed on ground, but in return has longer range and better damage compared to the Splatana Wiper.

Despite it's slow charge time and mediocre paint, being able to hit opponents from afar whether it be with Burst Bombs or the main weapon itself, makes the Splatana stamper a slayers weapon

Burst Bombs are a good backup for the Splatana stamper

The Splatana Stamper's lack of lethal bombs can also be a liability to a team composition. Lethal bombs – particularly either Splat or Suction Bombs – provide their user's team a couple advantages over another team that has no lethal bombs in its composition:[1]

Zipcaster is intended for getting up close and personal, allowing the Stamper's teammates to go in and get picks off of unsuspecting victims. Therefore, it is advised to have other special weapons available to complement Zipcaster, such as Big Bubbler, Ink Vac or any of the Splatoon 2 specials ported over to Splatoon 3.

Combining Zipcaster with other specials can bolster a team's ability to either make a push or counter the opponents' push:

Using Quick Super Jump allows Stamper users to more easily return and retreat to or from the battles.

Every player, including an Splatana Stamper user, is expected to come in contact with the opponent's ink on various surfaces, which can both be damaging and reduce mobility. Ink Resistance Up not only partially offsets the reduction in mobility but also delays the damage taken from contact with opposing ink:

Splatana Stampers are an ink-hungry weapon. When equipped, Last-Ditch Effort grants 24 ability points of three different stackable abilities for the last 30 seconds, or when the ranked score is 50 or below. These abilities include:

As a slayer weapon, the Splatana Stamper greatly benefits if it is able to swim faster. Swim Speed Up enables its user to more quickly close the distance towards an opponent, more quickly respond to an opponents' push, or even escape unfavorable situations.

Ink Saver (Sub) isn't really needed, but can. be helpful to be able to throw 3 Burst Bombs with Last-Ditch Effort.

While not as useful as Last-Ditch Effort, if one dies from an enemy, for 20 seconds after you respawn, you gain 6 abilities worth ten ability points of

Mostly useful in Rainmaker, this ability helps to destroy barriers such as the Big Bubbler and Rainmaker barrier or to break some special weapons including the Crab Tank and Wave Breaker.

Because the Splatana Stamper can benefit from sharking, being able to remain unseen while submerged can be a great advantage.

In recent times, it's been shown that Intensify Action can be great for increasing Stamper's mobility.