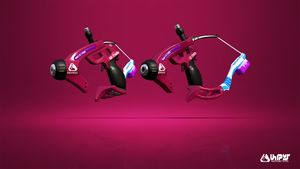 The Dapple Dualies's quick splat time and mobility gives the weapon a slayer role, while its kit can also give the user a more supportive role.

The Dapple Dualies' lack of lethal bombs can also be a liability to a team composition. Lethal bombs – particularly either Splat or Suction Bombs – provide their user's team a couple advantages over another team that has no lethal bombs in its composition:[1]

A Dapple Dualies user is usually expected to lead pushes towards their opponents' side, which puts them at risk of damage from opposing bombs and special weapons. Introduced in Version 4.3.0, Bomb Defense Up DX will not only reduce the nonlethal damage taken from opponents' sub and special weapons but will also reduce the tracking duration of opponents' Ink Mines and Point Sensors, allowing the user of this ability to evade detection more easily. Just three ability points, or one sub, offer plenty of utility:

Quick Super Jump decreases both the "charge" time before and the travel time of a Super Jump. Dapple Dualies users who include this ability will benefit in two ways since Quick Super Jump allows them to both return to the front lines more quickly and escape unfavorable situations more easily to preserve special gauge progress.

Sub Power Up decreases the time it takes to Super Jump to a Squid Beakon. Sub Power Up can help a Dapple Dualies user benefit from Squid Beakons more and allow their team to get back to the battlefield quickly to push.

A self-explanatory ability, Swim Speed Up enables an already mobile Dapple Dualies user to more rapidly close the distance towards an opponent, more quickly respond to an opponents' push, or even escape unfavorable situations. 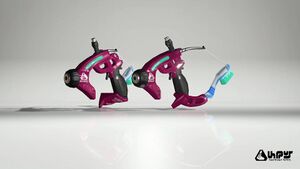