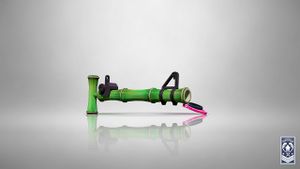 The Bamboozler 14 Mk I has a few changes that make it different than how it is in Splatoon 2:

The Bamboozler 14 Mk I's lack of lethal bombs – particularly either Splat or Suction Bombs – generally necessitates its user's teammates to equip weapons that include them. Lethal bombs provide their user's team a couple advantages over another team that has no lethal bombs in its composition:[2][3]

Damage Up increases the amount of damage per shot for uncharged, partially charged, and fully charged shots. While the damage of the Bamboozler 14 Mk I can never reach 100 HP, it is capable of getting very close to it with enough Damage Up.

The Bamboozler 14 Mk I is a ink hungry weapon, and with its quick charges, the user will likely find themselves out of ink often. Ink Saver (Main) can help reduce the amount of ink used per shot, allowing for more frequent charges and splats. The Bamboozler 14 Mk I lacks the range and damage of other, more conventional chargers, but it has better mobility and a quicker charge time, providing it the flexibility to be included in a wider variety of team compositions with less worry of being rushed down by opponents.

Despite its differences from most other chargers, the Bamboozler 14 Mk I is still an anchor's weapon:

While the Curling Bomb is not as versatile as other bombs, it still has a couple practical uses for the Bamboozler 14 Mk I user:

Like other, more conventional chargers, the Bamboozler 14 Mk I can provide support fire and help maintain maintain spatial control, and its mobility allows its user to more easily either push forward with the rest of the team or retreat from an advancing opponent. Nevertheless, it can still be redundant to have one or two more long-ranged weapons on a team for a few reasons:[3]

Although the Bamboozler 14 Mk I is better at turfing than traditional chargers, it is still less efficient at turfing than other weapons, due to its meddling ink efficiency and will have to rely on their teammates to maintain map control. Not having enough turfing ability – usually from having too many blasters and chargers – presents its own set of problems:[3]

While having multiple players on the same team launching Tenta Missiles might seem like a fun and easy means to cause opponents to scramble for cover, having too many players equipped with them – no more than one or two – can reduce the effectiveness of a team composition:[3]

Link most anchors, a Bamboozler 14 Mk I user generally keeps their distance from the opponent. However, their improved mobility allows them to move about the stage more often, meaning they can expect to come in contact with opposing ink on various surfaces, especially due to ink not always forming below the user's feet with each shot. While in contact with opposing ink, Ink Resistance Up both delays and reduces the damage taken and partially offsets reduction in running speed — including while charging a shot.

Although the Bamboozler 14 Mk I is more ink efficient than more conventional chargers, it still consumes a sizable amount, especially ever since Version 5.3.0. Ink Saver (Main) allows it to fire more fully charged shots and turf more before needing to refill the ink tank.

Ever since its introduction in Version 4.3.0, Main Power Up has made the Bamboozler 14 Mk I a more viable option for an anchor. It increases the damage output of all of the Bamboozler 14 Mk I's shots – tap shots, partially charged shots, and fully charged shots – by up to 20%. However, the damage of any shot cannot be increased above 99.9 HP — preventing the Bamboozler 14 Mk I from having a true one-hit-splat, and the amount of Main Power Up needed to reach this value ever since Version 5.1.0 – 44 ability points, achievable with either two mains and seven subs or three mains and five subs – is excessively high.

Fortunately, some slightly smaller amounts of ability points can be enough to optimize the damage output of the Bamboozler 14 Mk I, depending on how much Ink Resistance Up an opponent is equipped with. For example, an opponent equipped with ten ability points, or one main of Ink Resistance Up, delays the damage taken from your team's ink on surfaces by 20 frames, or 0.33 seconds, and reduces the damage taken from 0.3 HP/f (health points per frame) to 0.2 HP/f.[7]

Quick Super Jump decreases both the "charge" time before and the travel time of a Super Jump, allowing its user to escape more quickly. While a Bamboozler 14 Mk I user has more mobility than users of most other anchor's weapons, they can still benefit from the ability to more quickly escape from rushing opponents and maintain valuable special gauge progress for their Tenta Missiles.