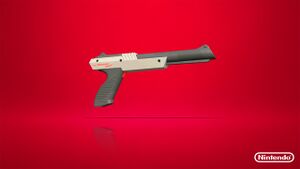 The N-ZAP '85 is a mobile, versatile weapon that provides turfing, lethal bombs, and a global special weapon. While its damage is weak, it fires rapidly and accurately, giving its user better fighting capability than some other support weapons, such as the Splattershot Jr..

The N-ZAP '85 is an all-rounded support weapon and a reasonably capable slayer weapon:

Despite its versatility, the N-ZAP '85 still has some disadvantages:

Suction Bombs are powerful lethal bombs with some unique applications, thanks to their ability to attach to surfaces:

Ink Armor enables its user's team to either push into opposing turf more aggressively or more staunchly hold its ground, such as while locking out the opponent:

Because an N-ZAP '85 user provides such valuable support for their team, they will always be a tactical target for the opposing team. Due to their weak damage, they would also benefit from having teammates wielding weapons that are effective at splatting opponents.[14]

While Ink Armor is a valuable global special weapon, having more than one reduces the number of unique special weapons your team can have. Plus, multiple Ink Armors used by the same team do not stack. Therefore, it would be redundant for a team to have more than two Ink Armor users.[13]

While special weapons used in combination are beneficial in general, a user of either Inkjet or Ultra Stamp would particularly benefit from the added survivability provided by Ink Armor:

An opposing N-ZAP '85 user provides invaluable support – turfing, Suction Bombs, and Ink Armor – for their team. Eliminating them will cripple their team's ability to either push into your turf or repel your team's push. However, do not underestimate their fighting capability.

Ever since its introduction in Version 4.3.0, Bomb Defense Up DX will not only reduce the damage taken from opposing sub and special weapons that are not one-hit-splat but will also reduce the duration of the tracking effects of certain opponent's sub and special weapons, such as Point Sensors and Ink Mines, allowing the user of this ability to evade detection more easily. This is a useful ability for almost any player, including an N-ZAP '85 user. Just three ability points, or one sub, offer plenty of utility:[16][18][19][20]

Comeback is a headgear-exclusive ability that, when equipped, grants 10 ability points of six different stackable abilities for twenty seconds after respawning from getting splatted by an opponent:

Overall, a just-respawned N-ZAP '85 user can spam their bombs more often, farm Ink Armor more quickly, and more quickly respond to the opponents' push.[16][22] While Comeback is not commonly used by most N-ZAP '85 users – only present on 17.10% of 1299 builds submitted to Sendou.ink[23] – due to the weapon's supportive nature, it can be useful for a more aggressive playstyle (e.g., for a second N-ZAP user on a team).

Every player, including an N-ZAP '85 user, is expected to come in contact with the opponent's ink on various surfaces, which can both be damaging and reduce mobility. Ink Resistance Up not only partially offsets the reduction in mobility but also delays the damage taken from contact with opposing ink:[16][19]

Last-Ditch Effort is a headgear-exclusive ability that, under specific conditions, grants its user 1 to 24 ability points each of the following abilities:

An N-ZAP '85 user benefits well from the reduced ink consumption per Suction Bomb used, allowing them to spam Suction Bombs during either a crucial defensive stand or a late attempt to reclaim the lead.[16][22] Thus, over 62% of 1297 N-ZAP '85 builds submitted to Sendou.ink include Last-Ditch Effort.[23]

While the N-ZAP '85's damage cannot be increased, these two benefits still markedly improve the main weapon's capability as a support weapon. A large majority of N-ZAP '85 builds – 1036 out of 1299 – typically have 6-9 ability points of Main Power Up:[23]

Because the N-ZAP '85's damage cannot be increased with Main Power Up, Object Shredder gives its user a better chance against Ink Armored opponents, making it a popular ability on over 82% of 1299 N-ZAP '85 builds submitted to Sendou.ink.[23]

Quick Super Jump decreases both the "charge" time before and the travel time of a Super Jump, helping its user escape unfavorable situations more quickly. Because an N-ZAP '85 user is expected to reliably provide their team Ink Armor, having the ability to quickly retreat and preserve precious special gauge progress can mean the difference between victory and defeat.[16][19]

The N-ZAP '85, an already mobile weapon in humanoid form, can still benefit greatly from Run Speed Up, particularly while firing.[16] Having the ability to strafe more quickly increases an N-ZAP '85 user's survivability, allowing them to last longer in fights to either win them or at least stall them long enough until teammates arrive. Most N-ZAP '85 builds submitted to Sendou.ink that have Run Speed Up equipped have 6-10 ability points:[23]

Special Charge Up accelerates building up the special gauge for Ink Armor, effectively reducing the turfing required. Since farming Ink Armor is one of a few roles of the N-ZAP '85, constantly having Ink Armor available for teammates ensures more successful pushes and counter-pushes.[16]

A universally valuable ability for almost any weapon, Swim Speed Up is particularly useful for the lightweight, short-ranged N-ZAP '85. Defensively, a faster swim speed allows its user to more easily avoid opponents' attacks and retreat from unfavorable situations more quickly. Offensively, swimming faster enables one to rapidly provide support for teammates and more easily close the distance between themselves and a longer-ranged opponent.[16]

Throughout Splatoon 2's lifespan, the N-ZAP '85 has competed with other Ink Armor support weapons such as the Splattershot Jr., H-3 Nozzlenose D, or Kensa Undercover Brella for a place on team compositions. The weapon has ultimately remained a decent pick throughout the game's many updates, even if it found itself outclassed by other options at times.[28]

The N-ZAP '85 saw a decent amount use at the start of the game's lifespan despite the existence of the Tri-Slosher, which had more range allowing it to bully short-range shooters like the N-ZAP.[29] While the Tri-Slosher was slayer-oriented, the N-ZAP '85 slots into a support role, being more mobile and having better turfing allowing for more frequent Ink Armors - which was an even more powerful special back then due to having no knockback or damage piercing when broken, as well as a longer invulnerability window.[30] The weapon therefore was nerfed to a 200p special gauge in 1.1.2, but this nerf was slightly undone to 190p in 1.3.0, though that patch also nerfed Ink Armor to compensate, making it more in line with the Ink Armor known today.

Version 1.4.0 would bring buffs to the weapon's mobility, turning it into a lightweight weapon, giving it slightly higher strafing speed while firing, and allowing it to paint its feet better. This allowed it to see a major spike in usage in version 2.0.0, where competitive player Sendou considered it one of the best weapons in the game due to its versatility.[31] In addition, Ink Armor was a strong counter to many of the top threats at the time, such as both versions of the Blaster, the Range Blaster, and the Bubble Blower.[32][33] Version 2.2.0 would then nerf the N-ZAP '85's special gauge to 210p, ending its prevalence in the game's meta for the time.[33] Going into 3.0.0, the weapon was still seen as viable, and competitive player Sorin noted in his tier list that the N-ZAP '85 was particularly good on larger maps and Tower Control, most likely due to the Suction Bomb, though eventually the H-3 Nozzlenose D became the superior Ink Armor support weapon.[34][35]

The release of another Ink Armor support, the Kensa Undercover Brella, would further sour opinions on the N-ZAP '85. The Kensa Undercover Brella had a 180p special gauge with decent turfing, and Torpedo was a stronger sub weapon back then, dealing more damage and using up less ink. Furthermore, the addition of Main Power Up gave the H-3 Nozzlenose D the ability to reach 49.9 damage to potentially splat opponents in two hits.[36] The N-ZAP '85 would receive buffs throughout the 4.0 patches such as decreased starting and ending lag from shooting and better feet paint, which when combined with nerfs to the H-3 Nozzlenose D such as higher points for special and requiring more Main Power Up to hit 49.9 damage, would slowly push the N-ZAP '85 back into relevance.[36]

Further nerfs to the Kensa Undercover Brella and Torpedoes would push the weapon out of the meta and see a new Ink Armor support rise up, the Splattershot Jr.[37] During this time, the N-ZAP '85 was considered to be worse than the Splattershot Jr. as the latter weapon fits the support role better, with very good ink consumption thanks to its special ink tank allowing it to spam more bombs, have better turfing, and get Ink Armor faster, especially due to its 180p special gauge.[38] Some situations warranted the use of the N-ZAP '85 due to it being a better fighter, but as a pure support it was outclassed.[39] The N-ZAP did get a buff from 210p for Ink Armor to 200p as well as the Last-Ditch Effort buff in 4.7.0 where it starts to activate when the opponents scored 50 points in Ranked, however,[40] which would become especially important later but did help it see more use.

By version 5.2.0, the N-ZAP '85 returned as a staple of the meta as it shifted to being more main weapon-oriented and being able to fight against the top threats, such as the Custom Dualie Squelchers, Bamboozler 14 Mk I, and Sorella Brella.[41][42] While it lacks the ink efficiency of the Splattershot Jr. and does not get as many Ink Armors, the former problem is largely mitigated by Last-Ditch Effort and the weapon has more overall strengths than the Splattershot Jr. such as having Suction Bombs, being better at fighting, and having good mobility.

Currently in version 5.5.0, where weapons such as the Kensa .52 Gal sit at the top, the N-ZAP '85 is still a strong support option in the quad shooter meta, lacking the weaknesses of other Ink Armor supports - the Splattershot Jr. and Kensa Undercover Brella lack fighting capabilities, the H-3 Nozzlenose D took a nerf to its ink efficiency in 5.4.0 and has a high special gauge requirement for Ink Armor at 220p, and the Rapid Blaster Pro Deco is vulnerable to being rushed down.[3] Having high object damage thanks to having gear space to use Last-Ditch Effort and Object Shredder is an important strength due to the prevalence of Splash Walls thanks to the Kensa .52 Gal, as well as for countering other Ink Armors. The N-ZAP '85 was projected to be one of the best weapons on Splatoon 3's launch.[43] It is arguably the best weapon to have Tacticooler currently,[44] and the special was assumed to be very strong even before players got to use it in the Splatoon 3 Splatfest World Premiere due to tweets from Nintendo mentioning how it shortens respawn time. It is now perceived as even stronger due to how many abilities it gives the player, and the fact that it gives 57 ability points of each ability.[45] Chara predicts the N-ZAP '85 will play similarly to its Splatoon 2 version at a competitive level.[46]

However, the popularity of the N-ZAP '85 would quickly decrease as the first meta developed, which involves Ninja Squid and displacement specials such as Trizooka and Tenta Missiles to counter chargers, which were rising in popularity due to stage design and lack of Ink Armor. As such, Tacticooler is a special not needed currently, and the N-ZAP '85 is considered more of a niche weapon.