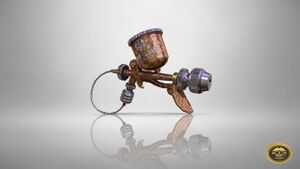 Similar to its variants, the Aerospray PG is a weapon with a high fire rate and turfing. Unlike its RG variant, the inclusion of a bomb help the weapon with splatting and the Kraken gives the weapon more options than its MG variant.

The Aerospray PG works slightly differently than in Splatoon 2.

While Damage Up does not do much for your main weapon, it increases the direct damage and splash damage of Burst Bombs, making it a useful to spam and to combo with the Aerospray PG.

Special Saver helps ease the Aerospray PG's Medium depletion, allowing for more Krakens throughout the match. This is especially important if you find yourself being splatted often, particularly in hectic Ranked modes like Tower Control.

Swim Speed Up buffs the Aerospray PG by both improving its mobility (which is needed due to its poor range) and the Kraken. Since the Aerospray is outranged and outclassed by many weapons, Swim Speed Up helps for quick getaways and repositioning in sticky situations. 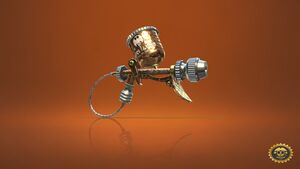 Like the other variants of the Aerospray MG and Splattershot Jr., the Aerospray PG is a short-ranged weapon designed for rapid turfing and quick buildup of its special gauge. However, it lacks a lethal bomb and the larger ink tank that the Splattershot Jr. has, meaning that is has a more specialized role.

Like the Splattershot Jr., the Aerospray PG is a support weapon:

To compensate for its short range, the Aerospray PG relies heavily on its Burst Bombs:

The Aerospray PG's rapid turfing, quick special gauge building, and Booyah Bomb make it specialized for Splat Zones on stages (maps) with a single zone that is neither too large nor occupied by a large structure (such as the display case in Inkblot Art Academy). A good example of this is Humpback Pump Track.

Like the Splattershot Jr., the Aerospray PG excels at turfing and building up its special but is short-ranged and weak in direct combat. Therefore, it is recommended that its teammates have weapons that are capable of confronting opponents either head-on or from a distance.

While Burst Bombs combo well with the Aerospray PG, they lack certain advantages offered by lethal bombs — particularly either Splat or Suction Bombs, which provide their user's team a couple advantages over another team that has no lethal bombs in its composition:

Main Power Up increases the ink coverage of the Aerospray PG by up to 16.7%.

Quick Super Jump decreases both the "charge" time before and the travel time of a Super Jump. An Aerospray PG player will be outmatched by most opponents, and Quick Super Jump can help them escape unfavorable situations more quickly, which avoids getting splatted, maintains a presence on the stage, and preserves precious special gauge progress.

Special Charge Up accelerates building up the special gauge for Booyah Bomb. In order for an Aerospray PG user to have Booyah Bomb more readily available to either capture or maintain a zone, it pays to devote some ability points to Special Charge Up.