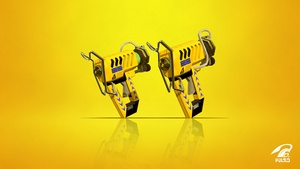 Like its Vanilla and Kensa variants, the Glooga Dualies Deco are dualies with the unique trait of increasing their range and damage after a dodge roll. The sub weapon of Splash Wall is extremely helpful to the weapon, letting it throw a Splash Wall and safely perform a roll to splat an opponent. The special weapon, Baller, can be useful in some situations, like helping the Rainmaker push forward by making a path, or capping a zone. However, using it to get out of a sticky situation can be risky since the Baller will usually get shredded very quickly.

The Glooga Dualies Deco are typically used as a slayer: