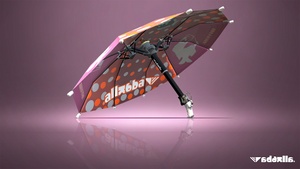 Like the original Splat Brella, the Sorella Brella is designed to restrain the opponents' mobility with its shield, which demands a different, more advanced playing style from other weapon classes. As the first variant of an existing brella-type weapon, its has a kit that permits a more aggressive playstyle than that of the Vanilla variant.

The Sorella Brella has traits of both a tank skirmisher and a zoning support weapon:

While not always as reliable as some other bombs — partly due to having a smaller explosion radius, Autobombs can still be used in a similar fashion and have some unique utility:

The Splat-Bomb Launcher is designed to either help push into a highly contested area or help repel the opponent's push:

Like the Splat Brella, the Sorella Brella allows its user to control space by restraining the movement of their opponents, particularly slayers armed with shooters or dualies. Use your good survivability to prolong battles and distract the opponents away from the objective, which your teammates can then push.[3][16]

While Autobombs technically count as a lethal bomb, they are noticeably easier to avoid. Due to this, try to include weapons that have either Splat or Suction Bombs in their kits, which provide its user's team many advantages over another team that has no lethal bombs in its composition:[17]

The Splat-Bomb Launcher is very effective at contesting territory, such as Splat Zones, but is not as reliable at splatting opponents who actively avoid the bombs. Attempting to pursue certain opponents with Splat-Bomb Launcher active further risks getting splatted. Therefore, it is advised to have other special weapons available to complement Splat-Bomb Launcher, as having too many users of any Bomb Launcher variant (no more than two) in a team composition will limit a team's arsenal of weapons:[17]

Coordinating with your teammates can greatly increase the Splat-Bomb Launcher's effect during a battle:

Because bombs are a good countermeasure against an opposing brella user, a Sorella Brella user can expect to have the opponents' bombs thrown their way. Ever since its introduction in Version 4.3.0, Bomb Defense Up DX will not only reduce the damage taken from opposing sub and special weapons that are not one-hit-splat but will also reduce the duration of the tracking effects of certain opponent's sub and special weapons, such as Point Sensors and Ink Mines, allowing the user of this ability to evade detection more easily. Just three ability points, or one sub, offer plenty of utility:[19][20]

While a Sorella Brella wielder who plays aggressively would benefit from all of these abilities, they would profit mostly from Ink Recovery Up, Ink Saver (Main), and Run Speed Up, which respectively improve the ink recovery and efficiency of the main weapon and strafing speed while either shooting or shielding.[15][19]

As a large consumer of ink, the Sorella Brella can be fired and launched more often if its user can refill their ink tank at a faster rate. A valuable utility ability for almost any weapon, Ink Recovery Up is even more useful for a Sorella Brella user, particularly to quickly recover ink after either launching their shield or using a Sprinkler.[19][20]

Opponent's ink on various surfaces can not only be damaging to a Sorella Brella user but can also reduce mobility, particularly when strafing. Ink Resistance Up not only partially offsets the reduction in mobility but also delays the damage taken from contact with opposing ink.[19][20]

The Sorella Brella consumes a sizable amount of ink per shot — about as much as a Slosher or a Kensa Rapid Blaster. Its user also has to consider the large amount of ink required to launch their shield. Ink Saver (Main) helps mitigate this issue by reducing ink consumption per shot and brella launch.[15][19] However, it is not advised to devote more than six ability points, or two subs, to Ink Saver (Main) due to both diminishing returns and fewer available ability points for mobility-enhancing abilities.[6]

A Sorella Brella user can potentially benefit greatly from Last-Ditch Effort, particularly from Ink Saver (Main) and Ink Recovery Up, allowing them to improve their overall ink efficiency while saving more ability points for other abilities.[19]

While swimming is still the Sorella Brella user's main means of travel, their strafing speed while either firing or opening their shield will be improved with Run Speed Up, enabling them to better evade and repel opponents' attacks.[19]

Quick Super Jump decreases both the "charge" time before and the travel time of a Super Jump. Sorella Brella users will benefit since Quick Super Jump allows them to both return to the front lines more quickly and escape unfavorable situations more easily to preserve special gauge progress.[19][20]

The Sorella Brella has shorter range than most other weapons, meaning that its user will have to get within range of their longer-ranged opponents in order to be effective in battle. Swim Speed Up enables its user to more quickly close the distance towards an opponent, more quickly respond to an opponents' push, or even escape unfavorable situations.[19]