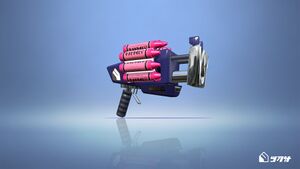 Like the original Clash Blaster, the Clash Blaster Neo is a short-ranged, rapid fire blaster designed for suppressing opponents at close range. However, it has a kit more suited for its playstyle, unlike that of its Vanilla variant. Unfortunately, its short range, poor turfing, and slow firing rate compared to shooters still restrict its effectiveness in certain matchups and situations.

The Clash Blaster Neo is a short-ranged slayer's weapon, intended more for stealth rather than brute force:

While the Curling Bomb is not as versatile as other bombs, it still has a few practical uses for the Clash Blaster Neo user:

Because blasters are generally poor at turfing, their users will have to rely on their teammates to maintain map control. Not having enough turfing ability – usually from having too many blasters and chargers – presents its own set of problems:[13]

Due to its short range, the Clash Blaster Neo requires its user to be in close quarters before engaging an opponent, who might be inclined to use bombs to either zone them out or flush them out while they are sharking. Ever since its introduction in Version 4.3.0, Bomb Defense Up DX will not only reduce the damage taken from opposing sub and special weapons that are not one-hit-splat but will also reduce the duration of the tracking effects of certain opponent's sub and special weapons, such as Point Sensors and Ink Mines, allowing the user of this ability to evade detection more easily. Just three ability points, or one sub, offer plenty of utility:[15][16]

Unless a Clash Blaster Neo wielder is on an extended splatting streak, they can expect to get splatted often. When equipped, Comeback grants 10 ability points of six different stackable abilities for twenty seconds after respawning from getting splatted by an opponent:

The former three abilities and Swim Speed Up are the most useful for the Clash Blaster Neo, allowing its user to conserve ink and more quickly pursue and pressure the opponent upon returning from spawn.[15]

Whether traveling across the stage or sharking in place, a Clash Blaster Neo user is expected to come in contact with the opponent's ink on various surfaces, which can both be damaging and reduce mobility. Ink Resistance Up not only partially offsets the reduction in mobility but also delays the damage taken from contact with opposing ink.[15][16]

Ninja Squid reduces detection by opponents while swimming on non-vertical surfaces. It allows its user to swim at full speed undetected at the cost of about 20% of the maximum swimming speed as of Version 3.0.0. Because a Clash Blaster Neo user has difficulty attacking most opponents head-on, Ninja Squid can make it easier for its user to shark and more safely approach opponents.[15]

Quick Super Jump decreases both the "charge" time before and the travel time of a Super Jump. Clash Blaster Neo users will benefit since Quick Super Jump allows them to both return to the front lines more quickly and escape unfavorable situations more easily to preserve special gauge progress.[15][16]

Super Jumping to a teammate after respawning carries the risk of getting splatted upon landing, due to the appearance of a Super Jump indicator. When equipped, Stealth Jump better covers this indicator from long distance opponents, allowing its user to more safely return to the front lines and maintain pressure on the opponent.[15]

As a short-ranged blaster that struggles to turf, the Clash Blaster Neo provides its user less mobility than shooters and dualies of comparable range. Swim Speed Up enables its user to more quickly close the distance towards an opponent, more quickly respond to an opponents' push, or even escape unfavorable situations.[15]