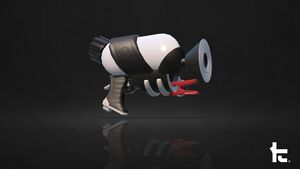 Introduced in the first Kensa Collection as part of the Version 4.0.0 update, the Kensa Splattershot is a short-ranged shooter with a three-shot-splat, rapid firing, good accuracy, and good mobility for a middleweight weapon, just like the previous Vanilla and Tentatek variants. However, unlike the former two variants, this weapon has a kit that provides its user more flexibility in what role they can play based on their team's composition or the current phase of the game.

While the Kensa Splattershot has the traits of a slayer's weapon, it also has the tools of a support weapon:

Despite its many strengths, the Kensa Splattershot still has a few weaknesses its user has to account for:

The Kensa Splattershot's versatility allows it to fit in almost any team composition. Even though it is capable of playing a supportive role, unless two other slayer weapons are present on the team, it is recommended to have another supportive weapon present to free the Kensa Splattershot user to play more offensively.

A Kensa Splattershot user generally gets close enough to the opponent and their bombs. Ever since its introduction in Version 4.3.0, Bomb Defense Up DX will not only reduce the damage taken from opposing sub and special weapons that are not one-hit-splat but will also reduce the duration of the tracking effects of certain opponent's sub and special weapons, such as Point Sensors and Ink Mines, allowing the user of this ability to evade detection more easily. Just three ability points, or one sub, offer plenty of utility:[16][17]

Unless a Kensa Splattershot wielder is on an extended splatting streak, they can expect to get splatted often. When equipped, Comeback grants 10 ability points of six different stackable abilities for twenty seconds after respawning from getting splatted by an opponent:

Ink Saver (Sub) and Swim Speed Up are the most useful for the Kensa Splattershot user, allowing them to throw Suction Bombs more often and more quickly pursue and pressure the opponent upon returning from spawn.[16]

Any good Kensa Splattershot user is expected to come in contact with the opponent's ink on various surfaces, which can both be damaging and reduce mobility. Ink Resistance Up not only partially offsets the reduction in mobility but also delays the damage taken from contact with opposing ink.[16][17]

Like other weapons whose builds include bombs, the Kensa Splattershot can greatly benefit from the reduced ink consumption per Suction Bomb used, allowing its user to spam Suction Bombs during either a crucial defensive stand or a late attempt to reclaim the lead.[16]

Main Power Up increases accuracy while either on the ground or in midair, allowing a Kensa Splattershot user to maintain some accuracy while jumping.[16]

Quick Super Jump decreases both the "charge" time before and the travel time of a Super Jump. Kensa Splattershot users will benefit since Quick Super Jump allows them to both return to the front lines more quickly and escape unfavorable situations more easily to preserve special gauge progress.[16][17]

Special Charge Up accelerates building up the special gauge for Tenta Missiles. Since farming Tenta Missiles is one of a few roles of the Kensa Splattershot, constantly having Tenta Missiles available for teammates ensures more successful pushes and counter-pushes.[16]

Super Jumping to a teammate after respawning carries the risk of getting splatted upon landing, due to the appearance of a Super Jump indicator. When equipped, Stealth Jump better covers this indicator from long distance opponents, allowing its user to more safely return to the front lines and maintain pressure on the opponent.[16] [21]