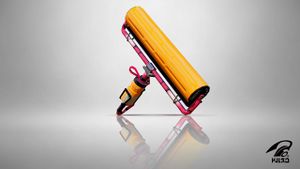 Compared to Splatoon 2, the Carbon Roller has a couple differences:

While Burst Bombs have excellent synergy with the Carbon Roller, they lack certain advantages offered by lethal bombs — particularly either Splat or Suction Bombs, which provide their user's team a couple advantages over another team that has no lethal bombs in its composition:

Inkzooka while useful for splatting, may not be as effective if having more than two players on a team with it for a few reasons:

Damage Up increases damage for the main, sub, and special. A Carbon Roller user will benefit most from increased damage from Burst Bombs to increase the chance for bomb combos and to negate Defense Up.

The Swim Speed Up ability allows players to swim faster, which makes harder target to kill and much more mobility when moving in squid form. A Carbon Roller user benefits to get into battles quicker, and to escape opponents. [2] 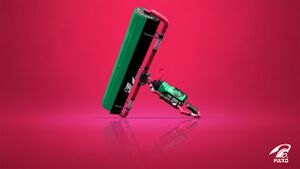 Unlike its Deco variant, the vanilla Carbon Roller is not as strong. While it maintains the same traits and playstyle, the kit does not synergize well with what the main weapon wants to do. Lacking Burst Bombs is a major drawback to the weapon, and its cheap Ink Storm, while nice to have, does not aid the weapon's splatting capabilities.[4]

The Carbon Roller is a stealth slayer's weapon:

While not always as reliable as Splat Bombs, Autobombs still provide plenty of utility for the Carbon Roller user:

The Carbon Roller is very effective at performing its intended role: stealthily and swiftly splatting opponents at close range while creating a sense of paranoia within the opposing team, which can sometimes distract them from the main objective of the battle. However, it has a set of glaring weaknesses that have to be addressed by the rest of its user's team's composition.

While a Carbon Roller is capable of turfing thoroughly through rolling, it is a slow and inefficient means, so its user will have to rely on their teammates to maintain map control for them to move about the map to remain an effective player. Not having enough turfing ability presents its own set of problems:[7]

While Autobombs technically count as a lethal bomb, they are not as reliable as conventional bombs. Due to this, be sure to still include weapons whose kits have other lethal bombs — particularly either Splat or Suction Bombs, which provide its user's team many advantages over another team that has no lethal bombs in its composition:[8]

As a short-ranged stealth slayer's weapon, the Carbon Roller encourages its user to shark nearby their opponents, who might be inclined to use bombs flush them out. Ever since its introduction in Version 4.3.0, Bomb Defense Up DX will not only reduce the damage taken from opposing sub and special weapons that are not one-hit-splat but will also reduce the duration of the tracking effects of certain opponent's sub and special weapons, such as Point Sensors and Ink Mines, allowing the user of this ability to evade detection more easily. Just three ability points, or one sub, offer plenty of utility:[9][10]

A Carbon Roller user is expected to come in contact with the opponent's ink on various surfaces, which can both be damaging and reduce mobility. Ink Resistance Up not only partially offsets the reduction in mobility but also delays the damage taken from contact with opposing ink.[9][10]

Introduced in Version 4.3.0, Main Power Up increases the damage output for all rollers (but not brushes) by up to 15%. For the Carbon Roller, this means improved splatting consistency and effective ranges, even with a little investment in the ability.[9] Since the Carbon Roller lacks the Burst Bombs on its Deco variant, splatting opponents may not be as consistent. This ability will mitigate this issue.

Ninja Squid reduces detection by opponents while swimming on non-vertical surfaces. It allows its user to swim at full speed undetected at the cost of about 20% of the maximum swimming speed as of Version 3.0.0. Because a Carbon Roller user has difficulty attacking most opponents head-on, Ninja Squid can make it easier for its user to shark and more safely approach opponents.[9]

Super Jumping to a teammate after respawning carries the risk of getting splatted upon landing, due to the presence of a Super Jump indicator. When equipped, Stealth Jump better covers this indicator from long distance opponents, allowing its user to more safely return to the front lines and maintain pressure on the opponent.[9]

As a short-ranged weapon that excels at flanking, the Carbon Roller greatly benefits if it is able to swim faster. Swim Speed Up enables its user to more quickly close the distance towards an opponent, more quickly respond to an opponents' push, or even escape unfavorable situations.[9]