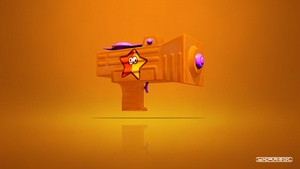 The Custom Splattershot Jr., is a rapid firing weapon that provides turfing and – with its sub and special weapons – support but lacks accuracy and range. Since Version 3.2.0, it now has a larger ink tank with 10% more capacity, further improving its already excellent ink efficiency.

The Custom Splattershot Jr. is capable of various tasks needed to win battles, but its specific traits make it best suited for a traditional support role:

The most reliable way a Custom Splattershot Jr. player can engage an opponent is through constant and coordinated use of Autobombs:

The Custom Splattershot Jr. is great at turfing and building up Ink Storm but poor in splatting. Therefore, it makes a great complement to – and is well complemented by – a slayer, particularly one whose weapon has trouble turfing, such as a Splattershot Pro or a blaster.

Like other support weapons whose builds include bombs, the Custom Splattershot Jr. can greatly benefit from the reduced ink consumption per Autobomb used, allowing its user to spam Autobombs during either a crucial defensive stand or a late attempt to reclaim the lead without relying so heavily on Ink Saver (Sub).[11]

Because Object Shredder occupies an entire main ability, its main drawback is that it reduces the amount of ability points allowed for other potentially important gear abilities, such as Ink Saver (Sub) and Special Charge Up. Last-Ditch Effort can be combined with Object Shredder to reduce the need for Ink Saver (Sub).

Quick Super Jump decreases both the "charge" time before and the travel time of a Super Jump. A Custom Splattershot Jr. player will be outmatched by most opponents, and Quick Super Jump can help them escape unfavorable situations more quickly, which avoids getting splatted, maintains a presence on the stage, and preserves precious special gauge progress.[11][12]

Special Charge Up accelerates building up the special gauge for Ink Storm. As arguably the quickest weapon at farming Ink Storm, constantly having Ink Storm available for more successful pushes and counter-pushes.[11]