For the similar special weapon in Splatoon 2, see Bomb Launcher.

The Bomb Rush is a special weapon in Splatoon.

When someone is using a Bomb Rush, their torso is surrounded by a glowing red circle. However, this circle does not appear on Callie when she uses a Bomb Rush during the final boss battle of Splatoon 2. The bombs thrown from the Bomb Rush's user are visually identical to bombs thrown as sub weapons. 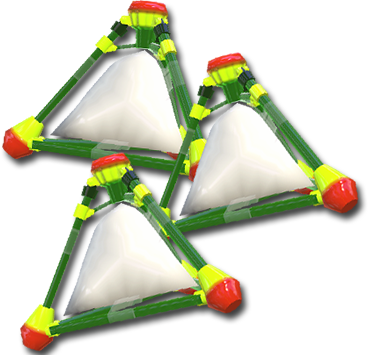 Bomb Rush temporarily allows the player to make use of their sub weapon with no ink requirement, allowing it to be thrown or placed as fast as is allowed by that particular sub weapon. This speed varies, with Burst Bombs being thrown more quickly than Suction Bombs.

Bomb Rush can be used with:

Weapons with Bomb Rush in Splatoon

In Splatoon 2, as explained in Sunken Scroll 11, no special weapons from the first game return. The role of the Bomb Rush was indirectly replaced by the Bomb Launcher, in that they both fire a barrage of sub weapons, however the Bomb Launcher fires the weapons further and with greater accuracy, and is not dependent on the player's sub weapon.

During the final battle of Octo Canyon, Callie uses a Bomb Rush to attack Agent 4, although now with oversized Splat Bombs and golden Suction Bombs. She does this whilst performing a remix of Bomb Rush Blush, a song presumably about the Bomb Rush special.