The Goo Tuber is a main weapon in Splatoon 2 and Splatoon 3. It is a charger with a few unique properties - it can hold a charge for an exceptionally long time in comparison to other chargers, allowing greater versatility, has the ability to store incomplete charges, and is able to splat opponents with a single partially charged shot (dealing over 100 points of damage at roughly 70% charge).

The ink consumption of the Goo Tuber is better than average, though not exceptional. To compensate for its strengths, the Goo Tuber's charge speed and range are close to the lowest in the weapon class. 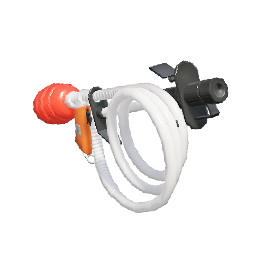 The Goo Tuber comes with Suction Bombs and Splashdown.

It appears in one Octo Expansion Station: 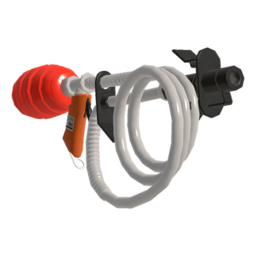 The Goo Tuber returns with Torpedo and Tenta Missiles as its kit.

It appears in 2 missions in Alterna:

Reaching certain Freshness levels with the Goo Tuber will reward the player with special badges that they can use on their Splashtag.