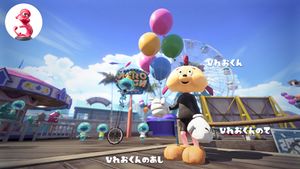 Fresh Fish is a fictional franchise in the Splatoon universe featuring the eponymous Fresh Fish character.

The promo shots showing the Fresh Fish gear are set in Wahoo World, referencing a theme park mascot suit, parodying the Mickey Mouse suits prominently seen in Disney Parks. Inkopolis News dialog for Wahoo World reveals that Fresh Fish is a series of films, with Pearl mentioning that her favorite entry in the franchise is Fresh Fish III: Revenge of the Fish and that she "always cries at the end". This is a parody of Star Wars: Episode III – Revenge of the Sith, rather than any Mickey Mouse property. In the Spanish versions, Pearl and Marina talk about an album Fresh Fish released rather than a film, with the both of them wanting to record a song with him. The Dutch dialog for the Knight vs. Wizard Splatfest reveals that the Fresh Fish is also the mascot for Wahoo World, similarly to Mickey Mouse being the mascot of both the Mickey Mouse franchise and the Disney Parks.

Although only advertised on the Japanese Twitter account,[1] wearing the Fresh Fish Head and Fresh Fish Feet together would visually change the player's Splatfest Tee into the Fresh Fish Gloves during the Knight vs. Wizard Splatfest, though this was only a cosmetic difference.

The Knight vs. Wizard Splatfest dialog revealed that the event tied into a recently released Fresh Fish video game. Marina mentions that one can play as either a knight or a wizard, or "multiclass by min-maxing your STR and INT stats in the skill tr[ee]". The presence of a skill tree and the ability to level up strength and intelligence stats are hallmarks of role-playing games, implying that to be the genre of the game; it is, therefore, likely the Enchanted and Steel gear sets are based on the designs of the knights and wizards from the game (in-universe). Marina also mentions that the game's theme tune was written by Off the Hook, which Pearl forgot about, and in the Japanese version, Marina says to Pearl in the results dialog for the Splatfest that, despite being the titular character, Fresh Fish is a fairy that functions as a guide for the players (though Marina would have said that he appears as the final boss's captive if she had won the Splatfest). The fantasy elements, choice between knights and wizards, vocal theme tune, and Fresh Fish's role in the game could be a reference to the Kingdom Hearts games, in which Mickey Mouse takes on a guiding role, the player is able to choose between strengths in attack and magic, and the theme tune is often performed by a band, with Kingdom Hearts III having been released a little over a month prior to the Splatfest.

The symbol on Fresh Fish's gloves resemble one of the radicals used in the Japanese kanji character for fish, "魚" (sakana).