Specs is a character from the Splatoon manga. 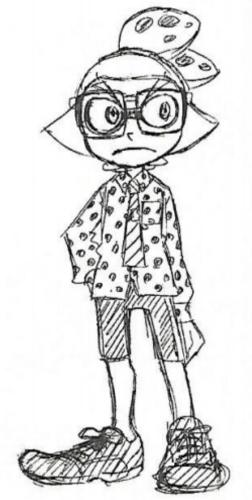 In his debut appearance, he wore the Retro Specs, Vintage Check Shirt, and White Kicks as well as wielding the Inkbrush. Starting with Volume Three, he maintains his Retro Specs but now wears a Baby-Jelly Shirt & Tie and a pair of Smoky Wingtips. He now uses the Octobrush in addition to a few other brushes such as when he wielded the Inkbrush Nouveau brush against Emperor. In the Octo Expansion escape chapter of the manga, he is seen using an Undercover Brella, hinting that Specs may be skilled in more than one weapon class. His normal appearance consists of his Retro Specs, Shirt & Tie and Plum Casuals.

Specs is almost always seen with a serious demeanor at all times. He is shown to be very anxious, which he tries to conceal to the best of his ability. Specs is shown to have a wide array of knowledge regarding Turf Wars and various weapons, but he gets upset when others don't listen to the advice he gives. Like Headphones, Specs is shown to dislike the random shenanigans that Goggles gets himself into, like getting naked in public and pulling down the pants of various Inklings.

Specs is shown to mostly get along with his teammates unless if it’s Goggles or Bobble Hat goofing off.